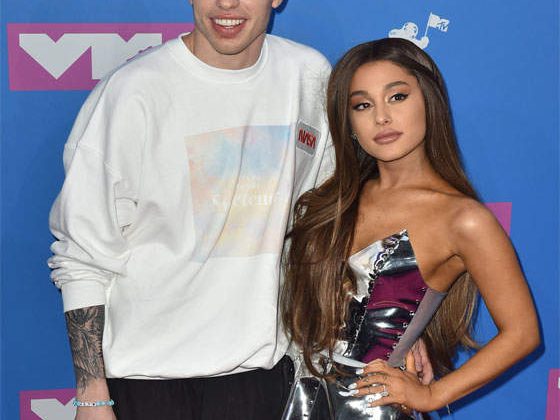 After posting a very cryptic note on his Instagram page, concern grew tremendously for Pete Davidson‘s well being. The post, which was born from this past weekend’s Twitter fuckery from Kanye West, read “i really don’t want to be on this earth anymore. i’m doing my best to stay here for you but i actually don’t know how much longer i can last.” Though he’s fine now, TMZ reports that at the time, his ex-fiancee Ariana Grande swung her magic ponytail around like a propeller and rushed to be by his side at NBC Studios in New York City. However when she got there, Pete’s security team hit her with a huge: ACCESS DENIED.

Pete stayed in his dressing room for the most part during rehearsal, and was limited to a very brief appearance to introduce musical guest Miley Cyrus. Prior to this appearance many people, fans and celebrities alike, showed their worry by reaching out to him and even alerting the NYPD about his behavior. In a show of her support Ariana dropped by the studio earlier to check on him however Pete was in no condition to see her.

Sources connected to Pete and NBC tell us, Pete alerted his security to hold his ex-fiancee at bay when she arrived at the building. We’re told Pete knew Ariana was on her way, because she was calling friends after he posted what looked like a suicide note. Ariana told friends she was rushing over to NBC, and they dropped a dime on her and gave Pete the heads-up.

Every time I think about how this all transpired from a war of words that began on Twitter it makes me question exactly how messy Twitter has become. In any event I’m blaming Kanye and Ariana for all of this. Instead of engaging in a juvenile argument about something that seems so dumb now they both should have done something more constructive with their time like smoked a bowl and baked some Christmas cookies. Hell, maybe we should all do that.