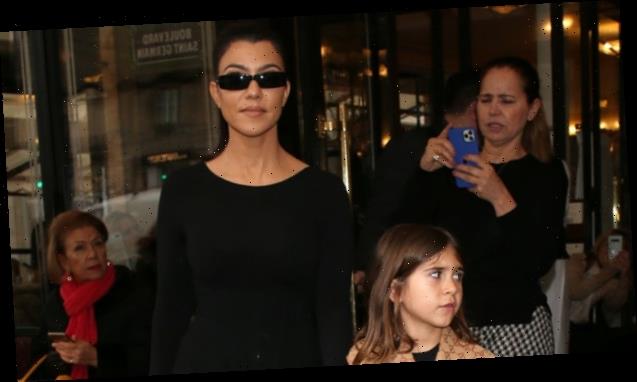 Penelope Disick crashed Kourtney Kardashian’s TikTok to lip-sync to a hilarious ‘KUWTK’ scene about her mom crying herself ‘to sleep.’

There was a surprise guest on Kourtney Kardashian‘s TikTok page on March 13: Penelope Disick! The Poosh boss’s eight-year-old daughter teamed up with a friend for a TikTok takeover on her mom’s account that had fans “rolling” in laughter. For the special appearance, the duo lip-synced to a viral scene from Keeping Up with the Kardashians.

“I mean, I feel fine, I just cry myself to sleep every night,” Penelope lip-synced to the audio that her mom originally said on the family show. Penelope’s friend then took over Larsa Pippen‘s part and lip-synced, “Yeah, that’s totally normal.”

Fans freaked out over Penelope’s unexpected cameo and joked that Kourt was unaware that it even happened. “LMFAOOO WHY DO I FEEL LIKE KOURTNEY DOESNT KNOW THIS IS HAPPENING,” one fan commented, while another wrote, “IM ROLLING BCUZ I KNOW KOURTNEY HAS KNOW [sic] IDEA HER DAUGHTER POSTED THIS.” Of course, this is just speculation; Kourt may have been laughing at the TikTok, too.

However, the comments weren’t totally a surprise, given the social media drama with Mason Disick that happened in 2020. Kourtney and Scott Disick‘s eldest child had started an Instagram account without asking for his parents’ permission first, which Kourtney revealed in an Instagram Live session in March of that year. “Scott and I just felt like — he’s 10. I feel like there’s an age limit on Instagram. I think it’s 13. I think, on Instagram, the thing that really worries me is the comments. People can be so mean,” Kourtney explained, who deleted the page. However, Mason then went on to film a Q&A over a live TikTok video after his Instagram ban!

Despite the online drama, Mason has also starred in mom-approved TikToks. Some of these have been with Kourtney’s friend, TikTok star Addison Rae! Speaking of Addison, she and Kourtney actually used the same audio that Penelope and her friend used above to recreate the KUWTK scene for a TikTok shared in June of 2020.

Penelope Disick and her friend were lip-syncing to audio from this scene in Keeping Up with the Kardashians.

This aforementioned scene is actually from a 2018 episode of KUWTK; Kourtney was opening up to her friends about the emotions she was going through while doing hormone injections to freeze her eggs. Kourtney opened up even more about this decision to freeze her eggs during an appearance on the Ellen Digital series, Lady Parts, on March 10.