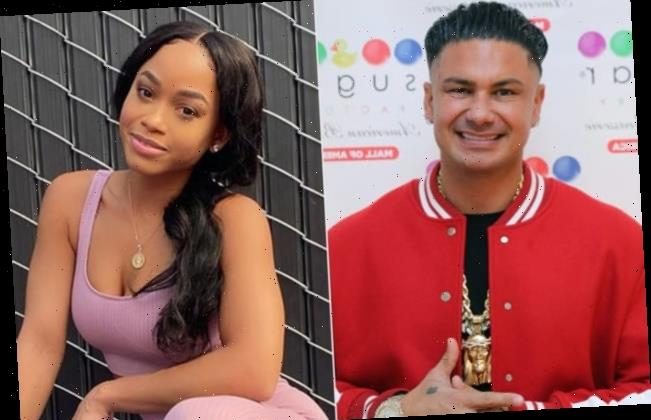 MTV’s A Double Shot at Love With Vinny and Pauly D never quite transformed into the Bachelor-esque ratings senation that network execs were expecting.

And that’s not just because of the confusing, unwieldy title.

In its second season, the show bafflingly abandoned the dating competition show format and instead became a sort of weird Gen-Z Jersey Shore spinoff, in which Vinny and Pauly share a Vegas apartment with their “exes” (girls they tried to bang in the  first season) and three “cugines” (Staten Island bros who are now trying to bang said girls).

But there was one storyline that kept viewers tuning in — and no, we’re not talking about Deryn’s continued flirtations with the dude whose soldier failed to stand at attention.

We’re talking about the on-again, off-again romance between Pauly and Nikki Hall.

If you’re one of the six people who watched A Double Shot at Love, you can skip this section.

For the rest of you, here’s what happened:

Back when the show was still a dating competition, Nikki fell head-ober-heels for Pauly, the had her heart stomped on when he decided not to pursue a relationship with any of the contesants.

Nikki reluctantly came back for Shot at Love Season 2, and after some initial awkwardness, she and Pauly picked up where they left off.

These days, Pauly and Nikki are officially a couple.

On the show’s reunion special, Hall revealed that she never left Vegas when filming wrapped, and she’s taken up residence with resident DJ Pauly D.

That fact — combined Snooki’s recent comments on the upcoming season of Jersey Shore — has fans believing we might be hearing an engagement announcement soon.

Snooki retired from Shore last year, so she wasn’t on hand for filming, but it seems she caught wind of some major developments on set.

“I wish I could say what’s happening because it’s insane,” she said on the latest episode of her podcast.

“It’s gonna be a good episode, you guys. Everybody’s family is there, which is nice.”

She didn’t come out and say “Pauly D gets engaged!” — although spoiling the surprise would be a pretty good way to stick it to her former bosses — but she strongly implied something big happend this season.

Some fans have claimed that Nikki wore an engagement ring in an Instgram Story that was promptly deleted this week, but those rumors remain unconfirmed.

1. Pauly is a 40-year-old dad, and his fist-pumping playboy routine will probably start to get old soon.

2. The most boring-sounding season in Shore history just wrapped filming, and the presence of Nikki might help to liven things up.

In concession to the coronavirus pandemic, the remaining cast hunkered down in a production “bubble” inside a Vegas hotel.

So if you thought the previous seasons of Jersey Shore: Family Vacation didn’t have enough of the cast sitting around a hotel room in sweatpants, boy, are you in for a treat!

A surprise engagement might be just what this season needs in order to keep things interesting.

Of course, a ratings boost wouldn’t be Pauly’s sole motivation for proposing to Nikki — but it might be the incentive he needs to do so earlier than expected.