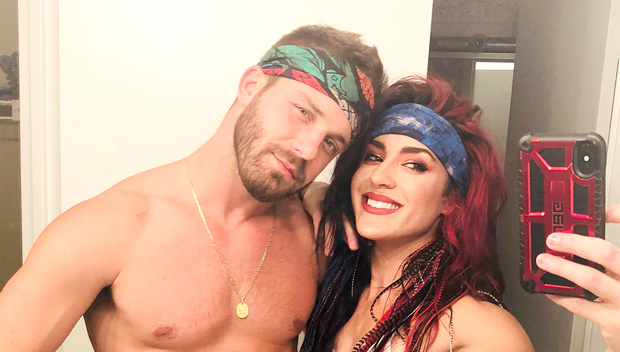 Paulie Calafiore isn’t giving up on his co-star from The Challenge, Cara Maria Sorbello, even after she unfollowed him on Instagram and split rumors erupted on Dec. 23! On Christmas day, Cara shared a picture of a tote bag bearing truisms like “People change so that you can learn to let go” and “You believe lies so you eventually learn to trust no one but yourself.” The MTV star related these quotes to her own drama, tweeting, “My mom never read the bag when she put my present in it… not knowing the bag was a Present in itself.” But Paulie, who has been accused of leading on ex Danielle Maltby for months while professing his love to Cara, quickly responded to the ominous tweet. “I’m fighting for us. I’ll die before letting an ex come between us and the connection we have ❤️🖤,” he replied with a GIF of The Joker and Harley Quinn. And he had more fighting words to say.

“I’ll never give up when it comes to Cara,” he wrote in a follow-up tweet. “We fell in love hard during this past season. Everyone saw our connection… producers, cast members, security… We no longer wanted to be in an open relationship and had been planning our future together. I’ll never give up on that ever.” Paulie was referring to Season 33 of The Challenge, after which he and Cara hit up Montana, New York, and Disney World in Florida. It was during that trip, which Paulie just shared a kissy picture from on Dec. 19, that the shocking accusations came forward.

Ex Danielle claimed in a tell-all that after Paulie cheated on her with Cara on The Challenge: Final Reckoning, he led her on with false promises. Paulie and Cara had been open about the affair ahead of the season’s premiere in July, but Danielle was upset about Paulie’s alleged actions afterwards. “He told me he loved me, had bought my engagement ring and when he got home to me we were were going to make a baby,” the Bachelor alum told People in an interview published on Dec. 22. She then indirectly addressed Cara, saying, “He told me he stopped it before it went all the way with you.” Danielle even claimed that Paulie visited her on multiple occasions while he projected his love onto Cara for the world to see — the man even has Cara’s name tatted on his leg! Paulie supposedly visited his ex in Nashville after Final Reckoning wrapped, and over Labor Day weekend in September…that would’ve taken place after he confessed his love to Cara while filming The Challenge episode, How Far Is Tattoo Far? Paulie and Cara had been in an open relationship for months prior.

Paulie’s former rep and Danielle’s current, Lori Krebs, even slammed her old client in tweets that have since been deleted. “I’ve stayed quiet about this but i can’t anymore. I can’t let this man ruin the lives of any other girl,” Lori’s tweets began, per E! News. “I told Paulie Calafiore that i would be there to support him if he did the right thing and take ownership and responsibility for his actions. Instead, he’s decided to continue his patterns and do what he does best – put the blame on anyone else but himself. I will not let him do this any longer.” The rant went on!

“He will come out with many more lies but the truth will prevail,” she wrote in a follow-up tweet. “Paulie will say i set him up trying to come up with some elaborate story to get Danielle into the media. My answer to that is: This kind of publicity does more harm to Danielle than good. Danielle can go on Bachelor in Paradise if she wants to. Her Bachelor family adores her. Being associated to you Paulie is NOT a good look for someone like her.”

But Paulie thinks his ex has it twisted, after she shared a vulnerable Instagram post in which she said she’s “been slowly draining since the lies started and my ex cheated on me.” To that, Paulie told E! News, “I had no idea I was blocked by Danielle until I received an email from her. I didn’t beg to be unblocked, I asked why I was blocked when we could just talk like adults.” While he took accountability for initially cheating, he defended his innocence regarding the timeline afterwards, continuing, “If she wanted me to stop talking to her then all she had to do was tell me.” Instead of attempting to win her back, as Danielle accused him of, Paulie kept up contact to help “her through everything that had happened,” he claimed.