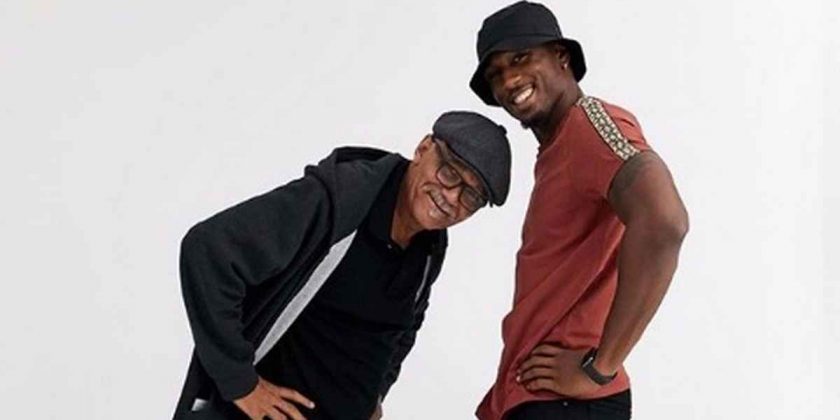 Ovie Soko was the Love Island contestant we all wished we could couple up with – the hilarious hunk with a heart of gold. But the professional basketball player, 28, has just entered another partnership with a significant other…one of the country’s biggest fashion retailers!

Yes, none other than ASOS have signed a six figure deal with the reality star. But it doesn’t stop there, they have also managed to recruit Ovie’s father for the heartwarming campaign.

The fashion brand first teased the idea on Wednesday August 28 , with a picture of an Ovie-style bucket hat. “Hold onto your hats, we’re dropping a BIG message this Sunday! Any guesses?’, the captioned asked.

The news of the collaboration was announced on Sunday by the online retailer in a short video of Ovie popping up from under the same bucket hat on their Twitter account. The caption of the post read: "We're coupling up with… @OvieSoko!!! Welcome to the ASOS family, Ovie.”

Then ASOS went ahead and gave the nation what they didn’t know they needed and announced that Ovie’s dad, Raymond, would also be partnering with the brand by sharing a photo of the father/son duo modelling clothes. The post read: “"Say hi to Ovie's dad, you'll be seeing more of him.” And it seems fans are already in love with Raymond too.

Commenting on the photo, one wrote “omg he’s so cute! he needs an insta” while another posted “Aww love it. pops got style, I can tell.” Although it is not yet clear what the ASOS/Soko collaboration will consist of, one thing is for certain: the Sokos are looking stylish!

However, we do have high expectations if Ovie’s villa looks are anything to go by. During his time on Love Island his fashion caused quite the social media stir, with fans falling for his Hawaiian shirts and range of loud hats and sleek shades.

But don’t worry, you won’t have to explode with anticipation for ASOS have provide the first bit of Soko family content to tide us over. On Sunday the brand released a video of Ovie unpacking boxes of gifts from the brand, all chosen by his father. The items include Vans trainers, a black pork pie hat and a black and white checked suit.

The post came with the caption. “He stole our hearts as soon as he stepped into the villa and now the secret is OUT. @OvieSoko and ASOS are officially an item. So it would be rude not to catch him unpacking his latest order. Oh and plot twist – his dad picked out his haul and we can’t handle the cuteness.”

Ovie has had fashion brands fighting over him since he first hit our screens. He was even the subject of a bit of Twitter banter between BoohooMAN and ASOS, which it looks like ASOS have now won.

BoohooMAN had repeatedly been showing Ovie love on Twitter. They recently tweeted: “Ovie we love you” and were referring to the reality star as “our man” on their social media pages. However, when one fan noticed that BoohooMan were trying to woo the hunk, they got ASOS to wade in by tweeting: “He can do better than [email protected] Do your thing."

BoohooMAN responded with a gif of fellow dreamboat Ryan Gosling looking unimpressed. But industry giants, ASOS, were having none of it. They then posted a flurry of memes including an angry young girl crushing a can and another of supermodel Tyra Banks asking: “Do you know who I am?”

As if all this wasn’t enough to prove Ovie’s potential for fashion icon status, the reality star has recently been spotted in the company of legendary British Vogue editor, Edward Enninful.

Let’s hope a Vogue shoot is in the pipeline. And let’s also hope Raymond Soko will be gracing those glossy pages!