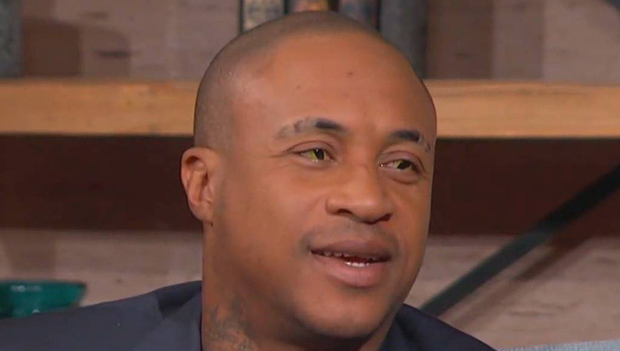 Orlando Brown gave a headline-making interview during an intervention with Dr. Phil McGraw that aired on Dec. 21 and in it, he revealed that he thinks the King of Pop is his father along with other bizarre details.

Former That’s So Raven star Orlando Brown, 31, who is known for having a past of legal struggles, gave a shocking interview during an intervention with Dr. Phil McGraw on his talk show and it’s leaving people very confused. In the episode, which aired on Dec. 21, Orlando wore bizarre green and black snake eye contacts and talked about various topics, including the late Michael Jackson.

“They’re my Michael Jackson eyelids,” Orlando told Dr. Phil about his snake eye contacts. “From [the] ‘Thriller’ [music video].” In addition to the MJ-inspired eyelids, Orlando said that the King of Pop is his father. “My full name is Orlando Brown Prince Michael Jackson Jr. aka Blanket,” the actor said, laughing. “My nickname I gave to myself. My father was Michael Jackson, the great Michael Jackson…I used to always wonder why I’m so astronomically blessed and gifted when it comes to being talented. I rap, sing and I do everything immaculately. The eyes. And also just speaking to different Jackson family members that, you know, have confirmed it. So yeah, it’s a blessing to know that. I can sit here today and say, that yeah, that Michael Jackson was my father.”

After his comments caused some confusion, Orlando later clarified that Michael was not his actual father but more of a “father figure” in his life and went on to talk about how he never met him and his famous Neverland Ranch. “I know my father would have wanted me to have it,” he said of Michael and his ranch. “He left it for me.”

In addition to the Michael talk, Orlando used the interview as an opportunity to talk about his desire to marry former co-star Raven-Symone, 33, who he says he has a good relationship with. “I want to marry her. I have to find out a way to ask her. Right now, I’m just chilling,” he said. He also went on to talk about how he had at least four kids and gave inconsistent answers when asked their ages. He first said they were ages 2, 5, 11, and “like 16 to 18” but when asked again later he said, “I got a 2-year-old, 4-year-old…5-year-old, 8 and 11. Two-year-old still in the belly. We don’t know [the name] yet.” When Dr. Phil pointed out the inconsistencies in his answers, he claimed the talk show host was ridiculing him. “Bro, honestly, I see them everywhere,” he said. “But at the end of the day, I barely see them. I don’t know them. They don’t know me,” he said. “That’s what this whole thing is about, being able to identify and, you know, get back with my kids and stuff.”

After talking about his past incidents, including the earlier this year, when he was arrested for various things, including alleged felony drug possession, misdemeanor charges of drug paraphernalia, and alleged battery against a spouse after getting in a verbal argument with his girlfriend and her mother, Orlando claimed he was now “four years sober.” He entered a treatment facility after his arrests in Sept. to get help for mental health and substance abuse issues.

Before the interview ended, Dr. Phil offered Orlando help and introduced him to a doctor from a Malibu addiction and mental health treatment center but he refused to accept it. “That sounds cool but I don’t have the time right now,” he said. “I really wish I did have the time. I’ve been going through treatments and a lot of group sessions and all of this stuff unnecessarily in the first place. I refuse to let myself believe that, you know, I have a problem.” He also talked about what he’s trying to focus on now. “Right now what I need help with is me basically having my home, my kids and my life. That’s all I need,” he said. “Like I mentioned earlier, four years sober. I don’t think I need the help.”

“I think some people on the outside need to grow up and they need to really take responsibility for what they’ve done in their lives and stop trying to hide between other people’s masks,” he continued. “I just got out of rehab, out of the E.R. I’m not doing no more time away from my kids that I need to. I want my kids to be with me in Neverland.”