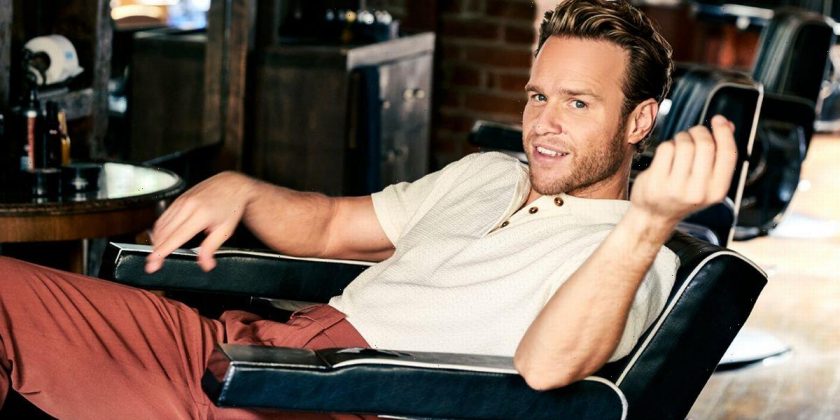 Olly Murs has revealed the sweet meaning behind his Cornish cliffside proposal.

The Voice coach, 38, popped the question to bodybuilder Amelia Tank in June and didn’t tell a soul about his plans – not even Amelia’s father.

Explaining why he chose that particular spot, Olly explained : “It was on top of a cliff in this little place in Cornwall. It’s a private place where her family go every year and we’ve got tons of photos there.

“We were on a walk with her family, but nobody knew what I was going to do. I didn’t even speak to her dad, which I know is quite a traditional thing to do, because not many things in my life are private and this moment for me was the one thing I wanted to keep private.

“Her mum was videoing it all – she was going, ‘Oh my God, oh my God, he’s doing it!’ It was lovely and they were over the moon.”

What people don’t know are the lengths Olly went to for the moment. In February, he was forced to cancel his summer shows after undergoing his third major knee surgery to replace a torn ligament.

Opening up about the challenging ordeal, he added: “I couldn’t walk. For 12 weeks I was sat in a chair staring at four f***ing walls with crutches and Amelia having to help me to the toilet and get me in the shower.

“I wasn’t in a good place. I had a lot of negativity about my career and whether I’d be able to get back dancing or performing again.

"[Ahead of] getting engaged, I trained for 12 weeks to get up that cliff. Amelia was like, ‘Why are you training so hard?’ and I was thinking, ‘Because I’m going to propose!’ I managed it up the cliff and got down on one knee, but getting up was horrible. Amelia had to help me.”

Olly fell for Amelia, 30, at an Essex gym in 2019. She was his first serious girlfriend since splitting with his ex Francesa Thomas back in 2015 and despite his happy-go-lucky spirit, had been feeling desparately low while single.

He added: "I don’t want to bang on about mental health and the difficult times because I’m feeling great at the moment. But all the cheekiness and the fun in the years I was single, it was just a facade. I was genuinely in quite a bad place at times. I didn’t talk about it to my team or anyone. I just felt really s**t, down and lonely. I didn’t like being single.”

The star, who first shot to fame on The X Factor in 2009, continues, “My private life was non-existent, I had no girlfriend, noone to share it with. I was always insecure about that. I was like, ‘Are people with me for the right reasons?’

As a result, it took Olly a while to let down his guard when he and Amelia first met.

He said: "To be fair, our first couple of dates were pretty crap – even she admits that. The date at the gym was amazing, but then we went on a couple of dates after and it was a bit weird. I was very wishy washy, very noncommittal. I was all over the place.

“I broke it off, but we rekindled things in the summer – then I figured it out, I had an epiphany. I was like, ‘What am I doing, she’s f***ing perfect, she’s the one for me. Stop being an idiot!’ That moment changed everything.”

Olly asked Amelia to move into his Essex mansion while on holiday in Bali in February 2020 – just weeks before England was plunged into a national lockdown.

Isolating together could have put pressure on the relationship, but it proved to be the making of them and Olly had no hesitation in popping the question 16 months later.