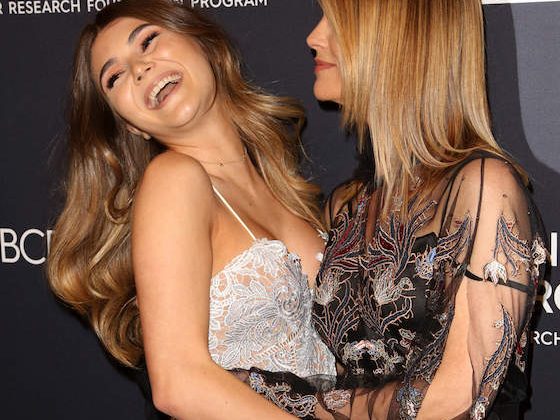 Lori Loughlin and Mossimo Giannulli’s college admission scamming plan is truly playing out like a very special episode of Full House about peer pressure. Except in this case, college is the junior girl’s bathroom, the bribery is cigarettes, and everyone involved appears to be playing the part of Bad Girl Gia. And I mean everyone; according to a source that spoke with Us Weekly, Olivia Jade Giannulli knew her parents were bribing her way into college and didn’t care.

Olivia Jade reportedly wants to go  back to USC to make it seem as though she’s learned her lesson. Basically, a heavy implication that Olivia is a-ok with avoiding the truth. Although to be fair, she’s a high-profile Instagram influencer, and I’m pretty sure “Be as fake as possible” is a major part of the job description. So it really should come as no surprise that she might be a-ok with her parents faking a college admission on her behalf.

There’s been some speculation as to whether or not Olivia Jade knew what her parents had been up to and anybody with a brain figured she knew because of the rowing pics she posed for. But now a source says that Olivia “fully knew” what her parents did to get her and her sister Isabella Giannulli into USC, like faking rowing credentials and cutting a $500,000 check.

The source says that Olivia didn’t get into any other California schools. To be fair, she didn’t technically get into USC either, but that’s besides the point. It was rumored back in April that Olivia and her sister Isabella really wanted to go to Arizona State University for the partying, but Papa Mossimo did everything he could to prevent that from happening.

USC hasn’t officially kicked them out of school yet (they’re merely suspended pending an investigation). But reports have said that if it can be proven that they knew their parents were bribing people, then they will be expelled. I would not be at all surprised if UsWeekly’s source was telling the truth, and Olivia Jade and Isabella knew their parents were pulling some Joanne the Scammer-level shenanigans. Because…come on, they totally knew. How in the world will Olivia Jade – a terrible student who didn’t get accepted to a single school – explain otherwise? “Your honor, it never crossed my mind that my admission was bought, because I thought USC stood for Under-achieving Students, Come on in.”