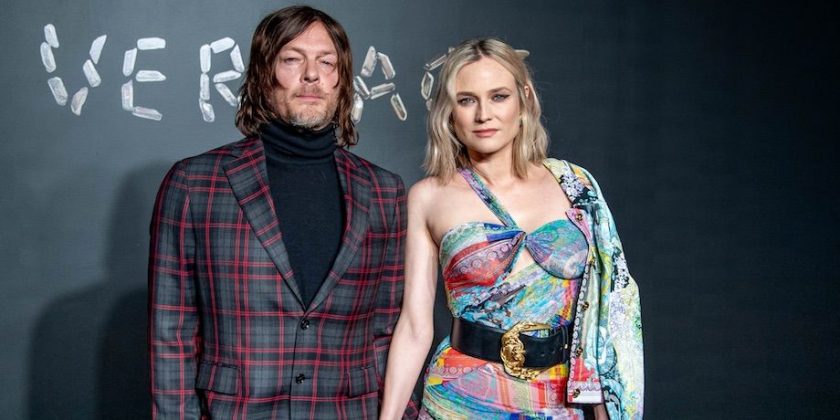 Norman Reedus started off the holiday season early by sharing a sweet Instagram photo of his newborn daughter on Monday. The star of The Walking Dead shares the child with girlfriend Diane Kruger, and it’s clear to see that Reedus is over the moon about the latest addition to their family.

Despite both being huge stars, the actors have worked hard to keep their relationship as low profile as possible. In fact, the couple is so extremely private that most details about their daughter remain a mystery. While sources at Entertainment Tonight have confirmed the baby was born in November, there’s still no word on what they chose to name their child.

Secrecy aside, that didn’t stop Reedus from posting an adorable image of his little girl. The picture, which showed his large, tattooed hand holding his daughter’s tiny one, didn’t show her face — but it did come with a sweet message from The Boondock Saints star.

“A lot to be thankful for this year,” he posted in the Instagram caption. “this one especially. Love u Diane Mingus @helenachristensen Happy family.”

The caption is a celebration of every member of his blended family. Besides celebrating his girlfriend Diane Kruger, Reedus also included his son Mingus, 19, as well as Mingus’ mother and his ex-partner, supermodel Helena Christensen.

A lot to be thankful for this year. ❤️ this one especially . Love u Diane Mingus @helenachristensen Happy family ?

And Kruger was quick to return the love to her partner, commenting “I love you” with a heart emoji. Reedus responded with yet another sweet message that emphasized the bond between the two actors.

“You n me,” he wrote back. Christensen, who has remained amicable with Reedus ever since the split, added a kind comment of her own that shows how supportive this blended family really is.

The couple ditched their usual total secrecy to get excited about their daughter’s first Christmas. Kruger got emotional when describing the situation during an interview with Entertainment Tonight.

“It will be special. Baby’s first Christmas,” she said. “We just moved into a new home, and so yeah, we just want to be home and light a fire.”

“I already am [emotional]. Every day is special, you know, I am actually being emotional being away from her for the first time, so I am looking forward to coming home,” Kruger said. “But I love Christmas and I just want to be cooking and, you know, sit on the couch with my baby and my man.”

Reedus and Kruger met in 2015 on the set of Sky. They began dating in early 2017 and have been inseparable ever since.