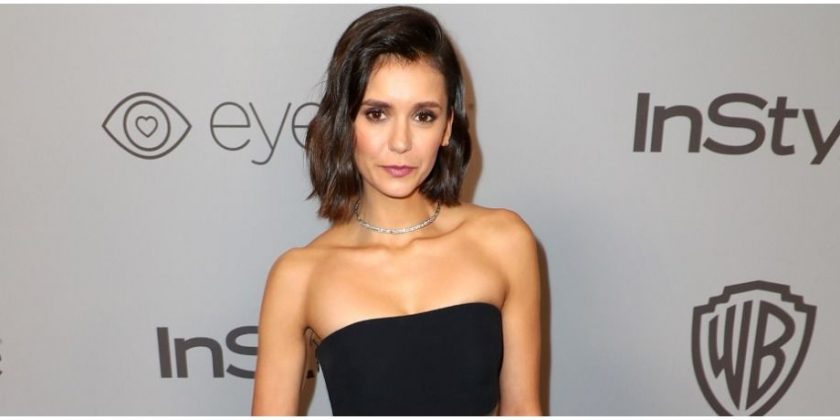 Nina Dobrev is showing off her sexy bikini body in her latest social media snap.

On Friday, December 14, Nina Dobrev posted a photo of herself with her best friend Julianne Hough to Instagram. In the photo, the two friends are seen laughing and having fun during a recent vacation to Indonesia.

In the series of photos, Nina is seen sporting a skimpy, black bikini underneath of a white see-through robe. The former Vampire Diaries star’s cleavage is on full display in the photos, and the actress is showing off her toned and tanned legs in the sexy photos with the former Dancing With the Stars judge.

Nina’s hair is parted to the side and worn in loose, beachy waves, and she dons a chain around her neck. Dobrev and Hough are smiling for the camera as they share a special moment.

In the caption of the photo, the actress jokes that Julianne’s husband, Brooks Laich, should be jealous, but that it seems she and Hough are now a new couple.

Over the past week, Dobrev has been sharing a ton of racy bikini photos from her vacation with her friends, where the group has been spending time on a yacht that looks like a pirate ship.

As previously reported by the Inquisitr, Nina Dobrev is working on a brand new comedy series for CBS. The show, which has been titled Fam, will center around a young woman who gets fed up with her father and decides to move in with her half-sister and her sister’s fiance.

Recently, Nina got a special visit from her former Vampire Diaries co-star, Paul Wesley, during her time on the set of the show. Wesley dropped by for a sweet visit with his friend.

In addition, the pair may have more time together as Paul is also working on a brand new CBS series called Tell Me A Story, which is being produced by Kevin Williamson.

“It’s a drama, so it has a lot of dark undertones, and scary moments, but it’s a very dramatic show. It’s a very emotional show,” Williams stated of the new show.

Fam will premiere early in the new year on CBS as one of the network’s mid-season pickups. Per IMDB, Fans can see it next year as Nina Dobrev co-stars with Blake Lee, Brendan Calton, Christina DeRosa, Tisha French, Emily Kosloski, Jake Lockett, David Pressman, and more on the new comedy.