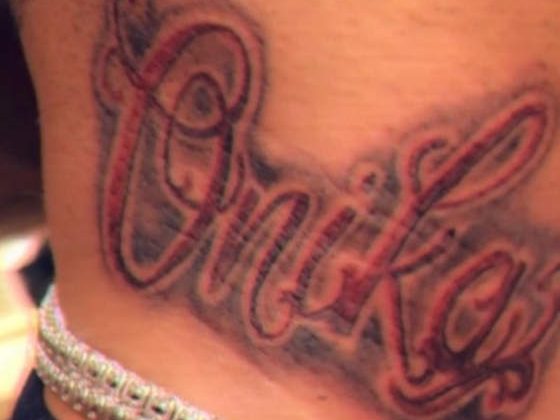 Attention all tattoo artists, laser tattoo removalists and bookies in the Greater New York area, this post is a PSA expressly for you! Nicki Minaj‘s new boyfriend of a few minutes, registered sex offender Kenneth Perry, may be seeking your services within the year to either cover up or remove the gigantic tattoo of Nicki’s name he just had emblazoned across his neck. I’ve got my $50 on laser removal within the next eight months. Place your bets!

Last night Nicki posted an Instagram video in the style of when you use your phone to check your teeth for spinach after lunch, but somehow she “accidentally” ended up recording herself. In the video, she casually plays with her hair and acts like nothing’s going on, then she slowly pans over to Kenny, sitting there wincing with a huge ass tattoo of Nicki’s real name “Onika” in ginormous letters across the side of his neck. Subtlety has a new mistress!

In the clip, Nicki asks “Did your tat hurt?”, to which Kenny seems to reply “Aww, nah“, but he might as well have been hooked up to a morphine drip for how stoned/grimacing in pain he appears.

Not that I expected more out of old Kenny Petty based on his rap sheet, but what can you say besides: A. I pity the fool. B. Secure that Minaj money! He’s got five kids’ mouths to feed. Maybe he’ll manage to eek out ten grand or so for every letter of her name during their run. And that’s his FIRST TATTOO! Go big or go home… I guess.

Nicki’s version of pissing on fire hydrants must be to get her men to get a tattoo tribute to her. Because it should be noted that Nicki’s ex Safaree Samuels had her portrait tattooed on his forearm, but he already got that mess covered up. One down, one to go!