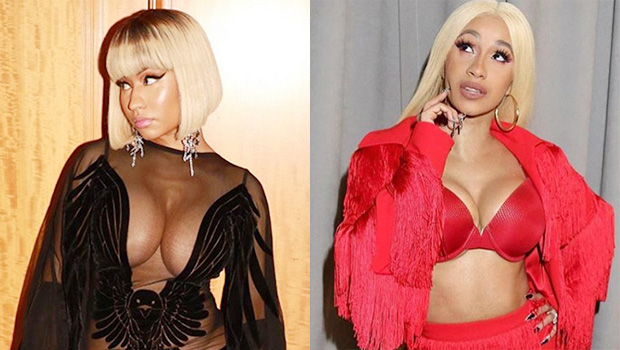 It was a great year for Cardi B and Nicki Minaj! Take a look back at both rappers’ sexiest Instagram pics because these two certainly made 2018 their own!

Cardi B and Nicki Minaj were not fans of each other this year, but we sure loved everything they put out! Nicki’s fans were all over her August album, Queen and people are still boppin’ along to the songs on Cardi’s debut album, Invasion of Privacy, which dropped in April. But music wasn’t the only thing these two nailed this year – their Instagram game was top notch!

Cardi wasn’t one of those celebs who kept her pregnant belly hidden from the public, meaning she consistently showed it off in Instagram pics and on Rolling Stone covers. But after welcoming daughter Kulture Kiari Cephus into the world with Offset in July, the “Bodak Yellow” hitmaker got back into shape and started flaunting her flat post-baby abs on the social media platform.

One of our favorite looks of hers came on Sept. 30 when she shared a pic of herself rocking a red push-up bra, and matching fringe jacket and pants. “MOST HATED BITCH ON THE PLANET,” she captioned it. Well we certainly don’t hate her!

Nicki also showed off her impressive cleavage on the ‘gram earlier in the year. On May 17, she dropped a pic of herself rocking a sheer black top with a velvet eagle on the front and captioned it, “I look beyond what ppl sayin & I see intent. Then I just sit back & decipher what they really meant.”

I look beyond what ppl sayin & I see intent. Then I just sit back & decipher what they really meant.

I look beyond what ppl sayin & I see intent. Then I just sit back & decipher what they really meant.

But while we’re taking a look back at these two, can we just take a second to remember that Cardi threw a shoe at Nicki at Harper Bazaar‘s ICONS party during New York Fashion Week in September? Because that happened this year. And it… was wild. Unfortunately, I don’t have an entire gallery dedicated to that but I can offer you one that includes the rappers’ sexiest Instagram pics of 2018! Go check it out above! May 2019 be filled with more Cardi and Nicki photos.