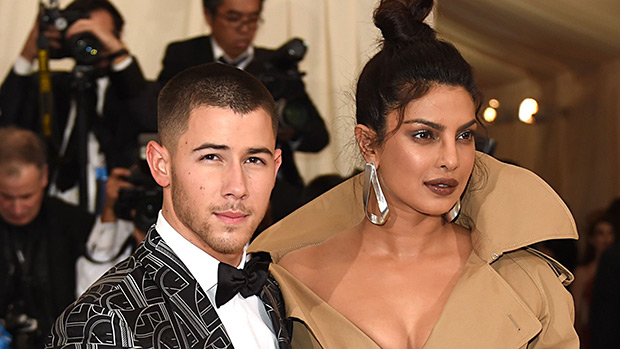 It’s time to celebrate because Nick Jonas and Priyanka Chopra are married! Just months after beginning their whirlwind romance, the two tied the knot in a glamorous ceremony!

Congratulations to Priyanka Chopra and Nick Jonas! Their whirlwind romance, which all started with a friendly date at the Met Gala, led them to the altar on Saturday, Dec. 1. In a heartfelt ceremony, Nick, 26, and Priyanka, 36, tied the knot, and less than a year after beginning this relationship, they were married! Love is indeed alive and well!

The couple said their “I do’s” during a Western wedding in Chopra’s home country of India, People reported. The ceremony was held at the Umaid Bhawan Palace in Jodhpur, Rajasthan, and was officiated by Nick’s dad, Paul Kevin Jonas Sr. Priyanka looked gorgeous in a custom Ralph Lauren wedding gown. In fact, both families, including the bridesmaids, the groomsmen (which included Priyanka’s brother Siddharth and Nick’s brothers Joe, Kevin, and Frankie.)

Wow. Nick and Priyanka are married. It’s feels like it was yesterday when they started dating. Actually, it was at the 2017 Met Gala in New York City where the seeds of their love were sewn. “We were both wearing Ralph Lauren, and we decided to go together,” Priyanka later revealed on Jimmy Kimmel Live! before insisting she and Nick were just friends. Yet, a year later, they took the leap and in May 2018, they began dating.

“I actually didn’t make the first move — he did,” Priyanka said to Entertainment Tonight when revealing how their relationship started. “He texted me. The first time was a text and just saying, ‘I think we should connect,’ and whatever and that’s how we started talking.” In July 2018, they were both seen wearing matching gold bands on their right hands during a trip to Mumbai. They made the engagement official in August, as they both shared the same engagement photo to their respective Instagram accounts. “Future Mrs. Jonas. My heart. My love,” Nick wrote, while Priyanka said she was “Taken … With all my heart and soul.”

While they didn’t announce an official wedding date, Priyanka’s friends threw her a bridal shower at the end of October at Tiffany’s in New York City. “Love, laughter and a room full of amazing ladies…and some special gentlemen (what a special surprise)! Thank you so much…for throwing me such a memorable bridal shower that broke all the rules! My amazing friends and family who made me feel so special and loved, thank you. Here’s sharing it with you…”