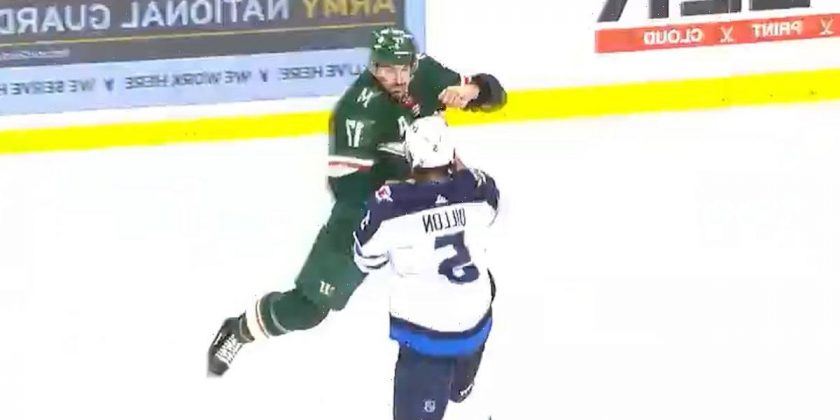 NHL winger Marcus Foligno looked less like a hockey player and more like a UFC fighter Tuesday — ’cause he threw a WILD Superman punch to kick off an epic on-ice brawl.

Foligno and Jets defenseman, Brenden Dillon, dropped the gloves in the first period of Minnesota’s game against Winnipeg … and it didn’t take long for Foligno to try the famous MMA move.

Just seconds into the tilt, the Wild forward leapt into the air and threw the punch … but fortunately for Dillon, it just barely missed.

The two — known as some of the best fighters in the NHL — then traded blows for a few seconds … with Foligno at one point connecting with a HEAVY uppercut.

The guys were ultimately separated by the refs after about 30 seconds … and based on the reaction of the two, Foligno clearly felt he won the scrap.

Both guys were hit with penalties for fighting … though they each returned.

Foligno ended up getting the last laugh on Dillon — the Wild won in crazy fashion in overtime, 6-5.

But, thankfully for all of us, the Jets and Wild play again on Nov. 26 — round 2 between Dillon and Foligno coming then?