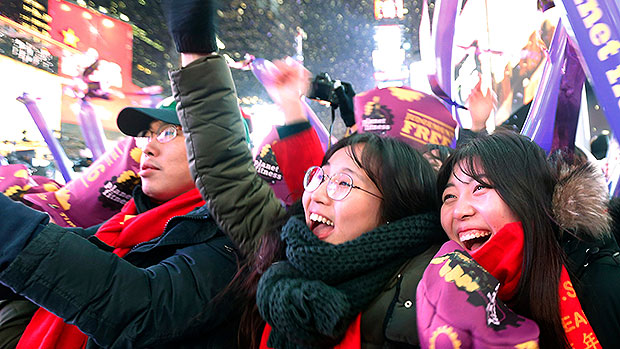 The Weather Channel predicts Time Square will be in the high-40s during the final seconds of 2018. Despite this forecast, an estimated million people will gather in the heart of New York City to bid farewell to the year before welcoming in 2019. For those who don’t want to brave the weather or who couldn’t make it to the Big Apple this year, don’t fret! The whole extravaganza will be streamed online for free! No cable/satellite subscriptions are needed, so just kick back and enjoy all the excitement of New Year’s Eve in Time Square from the comfort of your home (or wherever you happen to be when the clock strikes midnight.)

Times Square’s celebration, one of the biggest in the world, has been going on for more than a century. The famed ball, which lowers down as the last seconds of the year tick off, has been dropped every year since 1907 except for 1942 and 1943, when the ceremony was suspended due to World War II’s “dimout” lighting restrictions, per the official website. Don’t expect ConEd to restrict anything this year, as 50,000 watts of electricity will power this year’s ball, while an estimated 161 megawatts will be used to light up Times Square this year.

Some other fun facts about tonight, from 6sqft.com: 3,000 pounds of confetti will be blasted over the crowd when the ball completes it drop, equating to about 30,000,000 pieces of colored paper. Add that to the 48-plus tons of trash that will be left behind by the estimated million people in Times Square. It took 178 sanitations workers 7 hours – while using 26 mechanical sweepers, 25 collection trucks, 38 blowers and 40 hand brooms – to clean up the mess in 2016.

One of the biggest events of the night will be Dick Clark’s New Year’s Rockin’ Eve With Ryan Seacrest. Jenny McCarthy will join Ryan Seacrest to host the event, which will see performances from New Kids On The Block, Ciara, Weezer, Shawn Mendes, Florida Georgia Line, Kelsea Ballerini, and more. Christina Aguilera will headline the extravaganza, meaning she’ll hit the stage right before midnight. Though rain is expected to fall, don’t expect it to dampen the partygoers’ spirits.

“It adds to the story, it becomes a character in the whole narrative,” Ryan Seacrest said, per WABC7. “I think it adds to the performers’ anxiety a little more than ours.” Here’s hoping it doesn’t lead to any “technical difficulties” (think Mariah Carey in the final moments of 2016 and that memorable/disastrous, performance.)