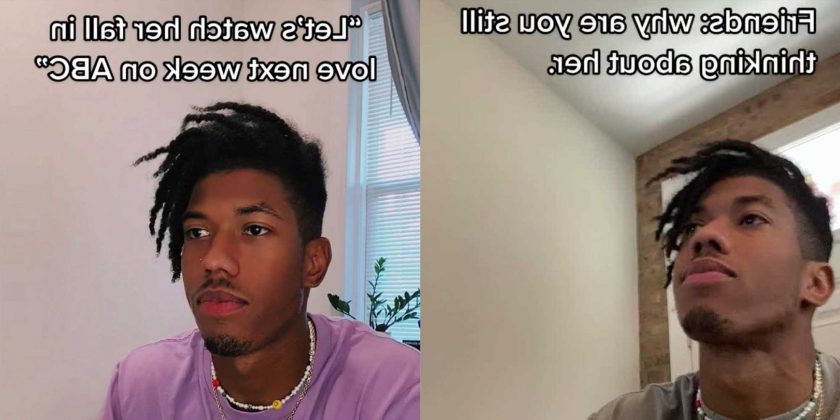 Raise your hand if you felt personally traumatized by Gabby and Nate’s heart-wrenching breakup in Amsterdam this season on The Bachelorette. (*EMPHATICALLY RAISES AND WAVES BOTH HANDS*)

The end of Gabby and Nate’s love journey broke a lot of Bach fans and Nate made it clear that he was struggling with the whole sitch when he posted some post-split TikToks that racked up millions of views.

In one TikTok, summed up Gabby’s unforgettable specialness with a series of images that explained that she is pure gold who stands out in a crowd in the best way:

And in another, he showcased the way it feels to quickly go from people acknowledging that she ended things with Nate/broke his heart to wanting to watch her fall in love with someone else on TV (which, oof):

Now that Nate has had time to process the split (and a chance to see Gabby face-to-face again, while filming the “Men Tell All” special), he’s ready to talk about the breakup, the TikToks, and his current feelings for Gabby. And he proved it by talking about all of those things on the Talking It Out with Bachelor Nation podcast with Mike Johnson and Bryan Abasolo.

Here’s a quick look at the highlights of Nate’s candid chat (via Bachelor Nation):

On seeing Gabby again for the first time since their split:

“She looked so beautiful. It was just like seeing an old friend, though. We’ve had an ample amount of time since our split and I’ve grown from it and I am appreciative for it. I was just glad to see her doing well. It was a breath of fresh air seeing her walk in and we got to share that small interaction.”

On how he feels about the breakup now:

“I was able to process a lot of what happened since we broke up. I didn’t get to say a lot of what I wanted to say in Amsterdam, but looking back I just wanted her to know that I had no hard feelings towards her. I view her as a very astute individual who’s in tune with her emotions. She made the right choice for her, I’m always going to be in her corner.”

On why he posted *those* TikToks:

“I like to express myself. When I got broken up with and I came back, I couldn’t do anything. So I had bottled up these emotions and couldn’t say anything because I was still actively in it. When I got dumped on the show, I could finally express what I felt at that time. A lot of that was something I wanted to get out there so I could move on from that. It wasn’t trying to win her back, it was just how I felt at that time when I was hurting.”

On his future with Gabby:

“For now, I’m not trying to get back together with Gabby. You don’t want to close a door for no reason and you never know what the future holds, but for right now, I am assuming she’s with the person she wants to be with. I am not trying to wreck a happy home for my own good, so if she’s happy, I’m happy.”