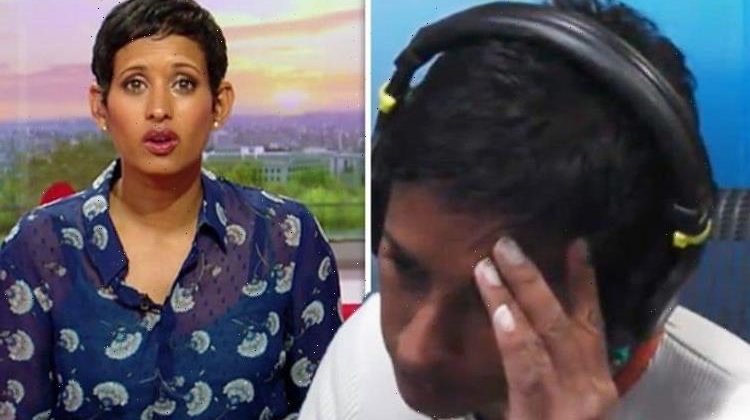 BBC Breakfast presenter Naga Munchetty was left overcome with emotion after she received a heartbreaking call from Arefa Shafaei. Speaking on Radio 5Live, the Afghan-born student became tearful as she shared her worries on-air.

Arefa, who is about to begin a degree in International Human Rights Law in the UK, revealed she is “devastated” after the Taliban took control of Afghanistan two weeks ago.

She urged British and American forces to return to the country amid the takeover.

The final UK flight carrying troops and diplomatic personnel has since left Kabul airport, bringing to an end Britain’s 20-year campaign in Afghanistan.

Around 14,000 people have been evacuated from Afghanistan in the past fortnight.

Speaking to Naga about the ongoing crisis, Arefa fought back tears as she became emotional.

She pleaded: “I’m asking the United States and the UK to come back to Afghanistan.

“They knew if they left it would happen. I’m asking all of the world leaders to put pressure on Pakistan and to not leave Afghanistan in this situation.”

Arefa added: “We’re all humans. There is no difference between us.”

The student revealed she has been unable to eat or sleep amid the ongoing crisis in Afghanistan.

Arefa explained she helped many displaced people from the rural areas of Afghanistan and revealed she can still hear the words of one woman who said her 14-year-old daughter had been taken from her.

Reacting to her story, Naga began to choke up on air as she became overwhelmed with emotion.

Naga looked visibly distressed after hearing Arefa’s story on 5Live as she shared a segment of their chat on her Twitter account.

In view of her 259,000 followers, she posted a clip of their conversation from her radio broadcast.

Fans flocked to comment on the video, as one wrote: “Heartbreaking to hear the distress in Arefa’s voice. Collectively we all need to help the Afghan people. Whatever happens in Afghanistan affects us all.”

Another remarked: “That was heartbreaking to listen to.”

A third added: “Difficult to listen to, but really important to hear. I listened to the full interview, as Arefa said it is important that we listen to the Afghan people.”