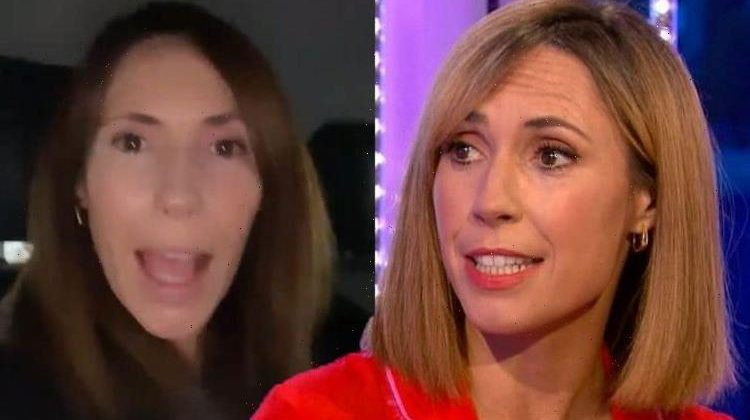 Alex Jones, 44, has been presenting on BBC’s The One Show since 2010, when she replaced Christine Bleakley. The presenter has taken to Instagram this evening to ask for help on her way to present The One Show due to a family dilemma.

Multitasking on the way.

The presenter posted the video to her Instagram story in view of her 326,000 followers.

She said: “Just on my way to the One Show now for a lovely show, hopefully tonight.

“Multitasking on the way, like every other parent, trying to sort out Ted’s fifth birthday party.

“So I’ve sorted out the venue, entertainment.”

Alex continued: “He’s five and I want to decorate but I want to use something a bit more environmentally friendly, more than just balloons.

“Last year I brought everybody a ladybird classic book and just gave them a piece of cake.

“I didn’t really do party bags as I didn’t know what to do with all the plastic.”

Alex then asked her followers for advice on alternatives for her son’s birthday party.”

She asked: “I was wondering if anybody has got any genius ideas for decorations and party bags?”

She returned to The One Show last Tuesday after taking four months of maternity leave.

Alex recently shared a beaming selfie with her rarely-photographed husband Charlie as she admitted to her followers she was making the most of shared parental leave after welcoming their third child in August last year.

Last week, it was reported that Alex developed a fear of dance after appearing on Strictly in 2011, a phobia she has never managed to overcome.

She admitted she found competing in the BBC ballroom dance contest so “terrifying” that she no longer enjoys busting some moves in public.

Alex said in the interview with Radio Wales: “It’s so terrifying. For me it stopped me dancing for ever more. But I did love the experience.”

She claimed on the show last week that becoming vegan helped her to get pregnant.

Alex said: “Well, I ended up pregnant after being a vegan for a bit.”

Ralf Little, a guest on the show, said: “I don’t think that’s how it works… I’m no scientist but…”

Alex then added: “There you go, it was so healthy!”

Co-host Ronan Keating found the comment amusing, and quickly took the moment to move the programme onto the next segment.