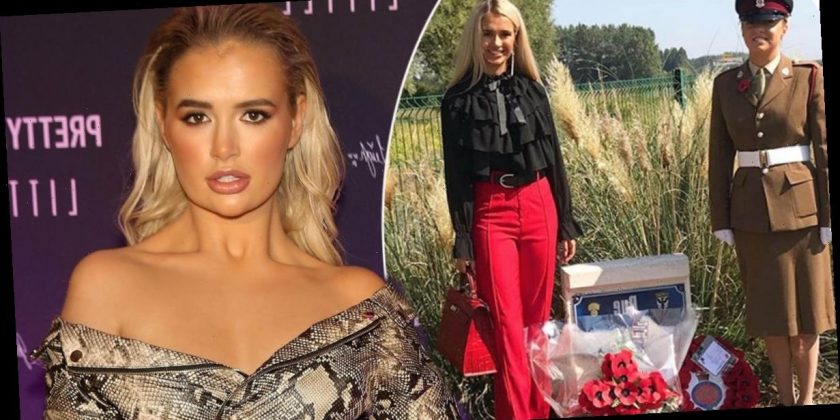 Love Island star Molly-Mae Hague took to Instagram to share a tribute to her solder sister Zoe on Remembrance Day.

Molly-Mae, 20, told her fans she is “proud” of her older sister, 23, for her hard work in the military medical corp.

Social media influencer Molly-Mae shared a picture of Zoe at a shooting range dressed in her army uniform as she told her fans: "Proud of my sister every single day for what she does."

She continued: "Following in my Grandad's footsteps."

As well as sharing similar looks, Molly-Mae and her older sister are close and regularly share pictures of each other on social media.

Zoe gushed over her sibling recently as she proudly posed for a picture wearing an ensemble from Molly-Mae’s fashion line with PrettyLittleThing.

She captioned her stunning picture: “Wearing @prettylittlething x MOLLY-MAE… Absolutely CRAZY writing that, proudest sister in the world. Thank you to everyone involved for making it a night to remember.” [sic]

It comes after Tommy Fury’s girlfriend opened up about the intense trolling that she has faced since she left the villa this summer.

The stunning blonde admitted that the backlash she has faced has sometimes been so severe that she wants to "give up" her newfound fame.

Speaking to MailOnline, Molly-Mae said: “There are some days when you feel like you can't do anything right.

"I have experienced things over the past few months that have been extremely hard.

"The trolling and hate has been intense, even over the last few days. I thought I prepared myself mentally but you can't.

Because of her own experience with the downside of the fame, Molly-Mae has sent a stark warning to the new batch of islanders who will appear on the winter version of Love Island.

The winter version of the hit ITV2 dating show is the first of its kind and is set to air in January from South Africa.

Referring to the new contestants on the show in search of love, Molly-Mae said: “They need to really, really understand what they're entering into.

“I could say 'be yourself' but my biggest advice is to really think about it. You need to understand what you're about to get yourself in for.

Last week boxer Tommy jumped to Molly-Mae’s defence after the meal she cooked for him was mocked online.

The professional boxer, who is currently training for his next fight, said the chicken dinner his girlfriend made for his was “the most caring thing anyone has ever done” for him and insisted he “doesn’t like seasoning” after the meal she cooked was labelled “dry” and “bland” on Twitter.

Molly-Mae – who attended the Little Mix PLT fashion launch recently solo – said: "I give up! Some days you just feel like you can't do anything right.

"I find it hard to disconnect sometimes. Everything is judged and scrutinised.