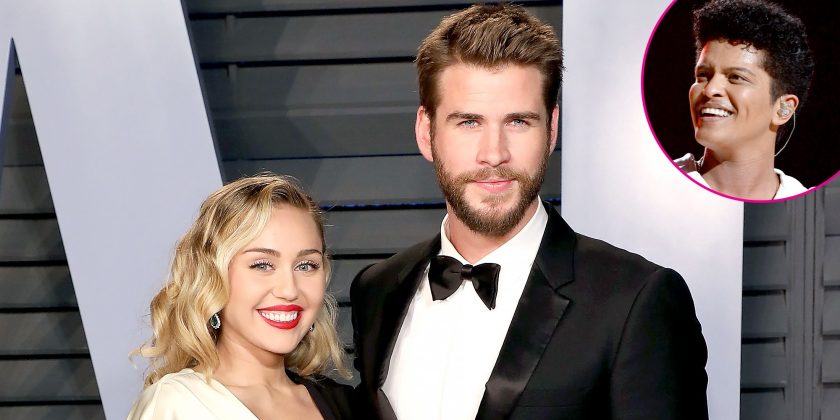 Busting a move! Miley Cyrus got a little funky following her wedding to Liam Hemsworth on Sunday, December 23, showing off her dance skills in her Vivienne Westwood wedding gown.

The “Malibu” singer, 26, shared a video of herself getting down to the 2014 Mark Ronson and Bruno Mars hit “Uptown Funk” on Twitter on Wednesday, December 26.

In the 15-second clip, Cyrus can be seen swishing her dress back and forth while dancing barefoot in front of a Christmas tree. Her husband, 28, also sneaks into the frame briefly, sticking his tongue out and throwing up a horn hand gesture.

Earlier on Wednesday, the Grammy nominee confirmed her marriage to the Hunger Games star with a series of black-and-white pictures of the couple hugging and kissing on Instagram along with the date 12.23.18.

“10 years later …..” she captioned one snap. “This is probably our one – millionth kiss ….” the pop star wrote in another caption.

Hemsworth also shared a snap from their nuptials on Instagram on Wednesday. “My love,” he wrote on a photo showing him embracing his bride.

The couple wed in an intimate ceremony attended by family members on Sunday. Surfer Conrad Carr posted clips on Instagram Stories of the couple cutting a cake at their Nashville home and standing near photos of balloons that read “Mr. & Mrs.”

Cyrus wore an ivory silk satin Vivienne Westwood off-the-shoulder dress, custom white satin heels by Cult of Coquette and delicate earrings by Sydney Evan and Jacquie Aiche while Hemsworth looked sharp in a black suit and tie with a white shirt and sneakers.

Cyrus and Hemsworth met while filming The Last Song in 2009. They got engaged in 2012, only to call it quits in 2013. The couple reconciled three years later.

Nicholas Sparks, who penned the novel the film was based on, was one of several celebs to wish the couple happiness: “This makes me so happy. Congratulations @MileyCyrus and @LiamHemsworth,” Sparks tweeted on Wednesday.