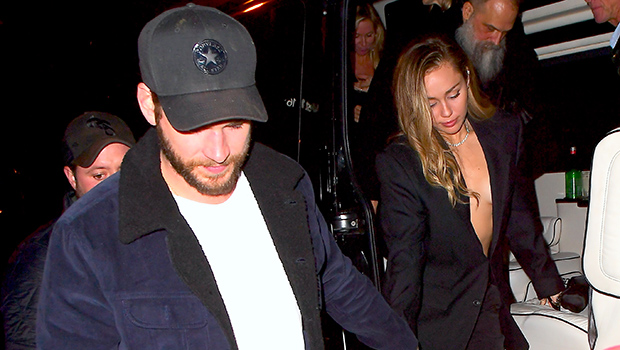 Miley Cyrus crushed it with her musical performance on ‘SNL’ and couldn’t wait to celebrate with fiance Liam Hemsworth. We’ve got their sweet after party PDA pics.

That’s a wrap for Saturday Night Live in 2018! The show ended their December telecasts on Dec. 15 on a high note featuring musical guest and SNL favorite Miley Cyrus performing her new single “Nothing Breaks Like A Heart” along with Mark Ronson. The 26-year-old couldn’t wait to hit up the show’s always epic after party with adoring fiance Liam Hemsworth, 28. The couple put on a sweet PDA display, holding hands and looking more in love than ever. Miley was smoking hot in a braless black blazer and matching trousers. which was similar to the cleavage baring look she wore on SNL.

Miley slayed her perf of “Nothing Breaks Like A Heart” and almost broke out her boobs in the process. She went braless in a shiny silver blazer and pants with no shirt underneath. She must have had some amazing double-sided tape to keep her jacket in place, as she flashed tons of cleavage yet somehow managed to avoid a nip slip.

With The Voice judge as the musical guest, Matt Damon as host and special guests Robert de Niro, Ben Stiller and Alec Baldwin reprising his Donald Trump persona,SNL notched its highest ratings since the show’s 2018 season premiere in September, according to our sister site Deadline. There was also interest sparked by drama surrounding cast member Pete Davidson‘s disturbing message earlier in the day. He wrote “I really don’t want to be on this earth anymore,” before deleting his Instagram account. The 24-year-old did show up on SNL briefly to introduce Miley and appear in a pre-taped skit.

In the lead up to Miley’s SNL appearance, she made the promotional rounds and described how heartbreaking it was to lose her Malibu home, but that it just made her relationship with Liam the strongest it’s ever been. She called him her “survival partner” during an appearance on Howard Stern‘s Sirius XM show on Dec. 12, revealing how he saved all of their beloved animals from the blaze before it burned down their house and surrounding property. “So actually, Liam, I’ve never loved him more for this” she began and Howard interjected, “This is your boyfriend? Fiancé?” “Yeah, kind of-ish,” Miley replied. “My partner, I call him my survival partner now. He thinks it’s not romantic, but I learned that it is.” Aww!