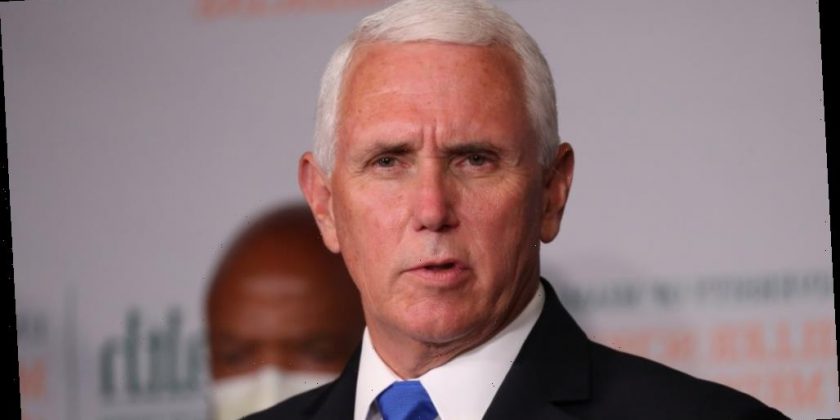 Vice President Mike Pence is seldom spotted without a suit and tie. It’s hard to imagine him relaxing in a T-shirt. In an unbelievable throwback photo, Pence showed his casual side, relaxing with his three children sitting on top of him. There was still some dark hair mixed in with his distinctive silver. “The highest title I will ever hold is ‘Dad’ and the greatest joy of my life is being father to the 3 greatest kids in the world!” Pence wrote in his caption (via Instagram).

During much of the ’90s, Pence worked as a conservative talk radio host (via Biography). From 1993 to 1999, Pence hosted The Mike Pence Show, which he called “Rush Limbaugh on decaf.” Before working in radio, Pence had lost two congressional elections in 1988 and 1990. When Pence ran for Congress again in 2000, he won. After serving in Congress for 12 years, Pence became Governor of Indiana before being selected as Donald Trump’s running mate.

Unlike Donald Trump’s kids, Pence’s kids tend to prefer staying out of the spotlight. His son, Michael J. Pence, became a second lieutenant in the Marine Corps before attending flight school (via Bustle). According to USA Today, Michael introduced his younger sister Charlotte to her husband, Henry Bond, whom he met while attending Bible study during flight school. Charlotte and her husband married in 2019. Charlotte famously wrote a children’s book about the Pences’ pet bunny, Marlon Bundo, which was lampooned by John Oliver (via Vanity Fair).

While Michael and Charlotte have been relatively private about their political beliefs, Pence’s daughter Audrey identifies as socially liberal. Despite her differences with her very conservative father, she reports that he’s proud of her for having her own opinions (via ABC News). She announced her engagement to her college boyfriend Daniel Tomanelli in 2019 (via Syracuse.com). According to her Instagram, Audrey graduated from Yale Law School this spring.