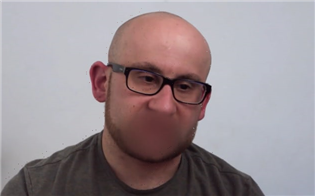 On the latest episode of 90 Day Fiance: Before The 90 Days, Mike Berk ran away after Ximena Cuellar dumped him.

In the previews for next Sunday’s episode, Mike and Ximena went off on each other.

Among many other things, Mike called her a “bitch” to the camera.

Now, he is apologizing … even as some fans tell him that he shouldn’t.

On Sunday’s episode, Ximena Cuellar told Mike Berk that it was over.

What had started as a night out had turned into a serious conversation.

It all changed when Mike brought up how Ximena’s mood had shifted when he stopped paying for everything.

Perhaps he was trying to hide his tears from cameras. Or maybe his panic had given him the zoomies.

Either way, he was devasted. Left behind at the table, Ximena showed how hard this had been for her, too.

In the previews for Season 5, Episode 15, the relationship is still over.

However, Mike and Ximena’s painful conversations about where things stand are not.

With the engagement broken off, all that is left is bitterness and words that they both would later regret.

We can see the two back at Ximena’s home as Mike confronts her over the breakup.

“This only reinforces the fact that you were using me for money,” he told her.

Ximena reiterated that she is not asking him to send her anything or pay for anything.

(Truth be told, this is where Mike’s toxic side is showing for the first time this season — as if he wants to leverage his past generosity to keep the relationship going)

As far as Ximena is concerned, it’s over … and he should just leave.

Ximena doesn’t just mean that he should leave on his flight the next day.

Instead, he should leave right then.

She told Mike to spend the night in a hotel before catching his plane out of Colombia and out of her life.

However, Mike decided to assert that he wouldn’t leave … on the grounds that he was the one paying the rent.

(Legally, that only works if it’s his name on the lease, at least in most places — we’re no experts on renting in Colombia)

Mike and Ximena are both clearly in their worst states, with Ximena yelling at him to just go as he refuses.

“She’s a mean, evil, cold bitch,” Mike tells the cameras in the preview.

Whether he meant this or not, Mike’s words there meant “daughter of a bitch.”

After the episode aired on Sunday night, including the preview, Mike took to Instagram to address his words.

“Honestly, I called Ximena ‘cold, calculated,’ I called her that b-word,” Mike recalled.

“Honestly, I was just in the moment,” he expressed.

“I was just so upset with everything going on, how I was being treated that entire trip, basically,” Mike explained.

“And it was the heat of the moment,” he acknowledged. “I really just want to apologize for that.”

“And I really, really want to apologize to Ximena’s mom because she’s always had my back,” Mike emphasized.

“She messages me here and there, asking me how I’m doing and so, she always has my back, her sister had my back,” Mike noted.

“So I really, really, truly want to apologize to both them, to Ximena’s sister and her mom,” he reiterated.