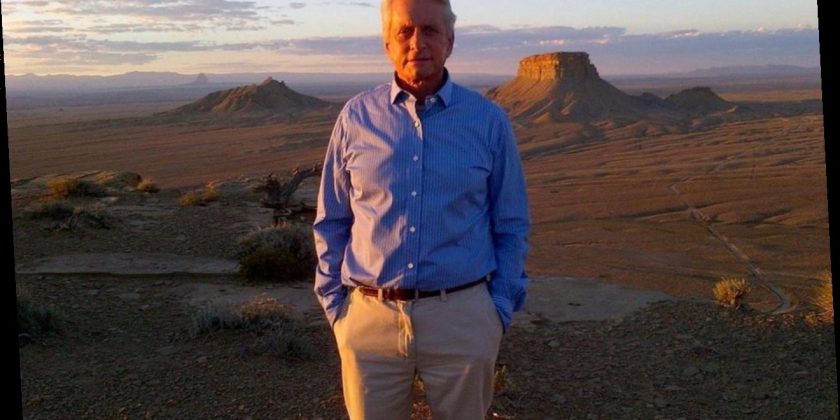 The ‘Wall Street’ actor is finally able to meet his newborn grandchild Ryder amid the COVID-19 pandemic, after his son Cameron Douglas and wife Viviane Thibes welcomed the boy in December 2020.

AceShowbiz –Michael Douglas is finally able to meet his grandson for the first time. Around a month after his son Cameron Douglas and his longtime partner Viviane Thibes welcomed their child in the midst of the coronavirus pandemic, the “Wall Street” actor posted on social media a picture of him with the newborn.

“The Kominsky Method” star shared the heartwarming photo on Tuesday, January 19 via Instagram. The black-and-white snap saw him smiling and cradling his infant grandson in his arms while holding on to a baby bottle. In the accompanying message, he raved, “First time I’ve seen my month old grandson, Ryder!”

The 76-year-old’s post has since been flooded with congratulatory comments from friends and fans alike. One in particular was actress Michelle Pfeiffer who gushed, “Congratulations Michael!” His followers did not miss the chance to express their joy over the meeting. “He’s beautiful!! Congratulation,” and “You look so happy! Congratulations!” were some of the comments.

Michael announced the baby’s arrival via Instagram on December 21, 2020. Sharing on Instagram a photo of Cameron alongside Viviane, their 3-year-old daughter, Lua Lizzy, and their newborn baby boy, he wrote, “Congratulations Cameron and Viviane! Welcome to the [world] Ryder T. Douglas! #ProudGrandpa.”

The Hollywood star’s son Cameron also broke the happy news using his own Instagram page. Putting out the identical image shared by his father, the 42-year-old penned, “Touch down planet earth. Welcome my Son…Ryder T. Douglas.”

Back in 2017, Cameron got candid about his bond with his father. “My father and I have an amazing relationship,” he told PEOPLE at that time. “I love spending time with him, and I will spend as much time with him as I can.”

The “It Runs In The Family” actor also revealed that he is “closer now than ever” with his family following his jail time. “In difficult times, we tend to come closer. It is a beautiful sort of trait that we have,” he pointed out.

Cameron was sentenced to a five-year prison term for possession of heroin and selling methamphetamine in 2010. He was then put behind the bars for seven years following the sentence and was released from prison in 2016.