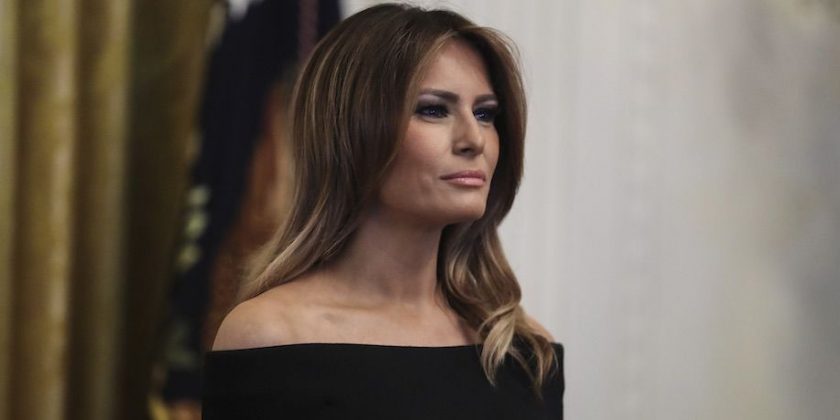 First lady Melania Trump is trying out a dramatically different look, and it’s causing quite a stir. According to E! News, Trump appeared on Sean Hannity’s Fox News show Hannity on Wednesday, while aboard the U.S.S. George H.W. Bush. Although she was there to discuss her work with military families, most of the focus was on her new look.

While traditionally Melania Trump has sported long, dark hair with some lighter highlights, that’s all behind her now. The first lady appeared on Hannity with a strikingly blonde new hairdo — a color which, some pointed out, was fairly close to that of her husband.

Unsurprisingly, the internet had quite a few thoughts about Trump’s new look. Many were quick to joke about how much Melania Trump resembled her stepdaughter, Ivanka Trump. Some humorously asked if that was an intentional move on the part of either Donald or Melania, or simply a random fluke.

Then there were a host of tweets that insisted Trump now looked distinctly like Stormy Daniels. Daniels, the adult film star who claims to have had an affair with Donald Trump — and who also claims to have been given hush money to keep quiet about the relationship in the days prior to the 2016 election, has long blonde hair as well.

Many Twitter critics popped up to offer their two cents on her new look — and by and large, the critics were overwhelmingly negative.

“If FLOTUS taught us one thing, it’s ALWAYS be nice to your hairstylist,” user @vivalakitch tweeted.

That being said, there were some that chose to come to the defense of Melania Trump’s new look. They congratulated the first lady on her bold style choice, and complimented her new blonde look.

This isn’t the first time that Melania Trump’s style choices have caused a stir. In June, Trump raised eyebrows by visiting a family detention center while wearing a long green army jacket which read, “I really don’t care. Do U?”

Many criticized the first lady’s fashion decision at the time, saying that it was a callous move considering the circumstances. Although originally Trump’s spokesperson insisted that there was no hidden meaning behind the jacket — and that it was nothing more than a coat — Melania Trump later turned the story around.

In an interview with ABC News personality Tom Llamas, per Twitter, Melania Trump admitted that she wore the jacket, “for the people and for the left-wing media who are criticizing me. And I want to show them that I don’t care.”