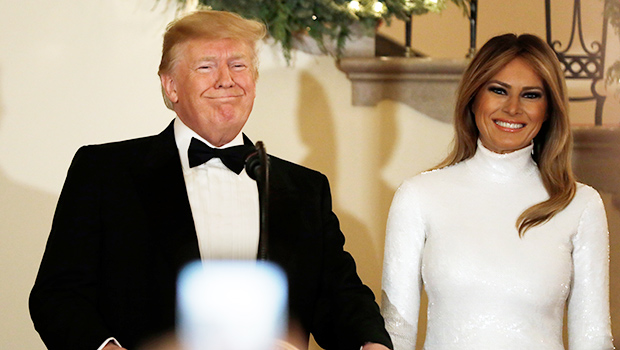 Melania Trump looked stunning when she stepped out in a sparkly white fitted gown for her appearance with Donald Trump at the Congressional Ball on the night of Dec. 15.

First Lady Melania Trump, 48, was truly a sight to see on the night of Dec. 15 when she attended the Congressional Ball with President Donald Trump, 72, in a long sparkling white gown by Céline. The stunning fashion choice looked flattering on the former model as she smiled and greeted the crowd of Republicans and Democrats gathered in the White House, which was full of beautiful holiday-themed decorations that Melania put up, for the event. The couple were joined by Vice President Mike Pence and his wife Karen as well as Donald’s daughter Ivanka Trump and her husband Jared Kushner during the festivities.

Melania and Donald made a grand entrance into the White House foyer for the ball as they walked out to the music of “Hail to the Chief.” Donald made a speech about the joy he’s experienced during his first two years of his presidency and called the White House his “happy place.” He also talked about tax and regulation cuts and praised the two Supreme Court justices he appointed, Neil Gorsuch and Brett Kavanaugh.

Like Donald, Melania also took the time to say a few things to the attendees. After her husband commended her work on the holiday decorations, she took the microphone and thanked everyone and gave them well wishes. “Welcome to the White House. Enjoy the evening. Merry Christmas and happy and healthy New Year,” she happily said. Despite the headline-making appearance, Donald and Melania both left after just 29 minutes of mingling with guests.

Melania’s appearance at the Congressional Ball is just one of various appearances she’s made at events this holiday season. She also visited the Children’s National Hospital in Washington D.C. on Dec. 13.