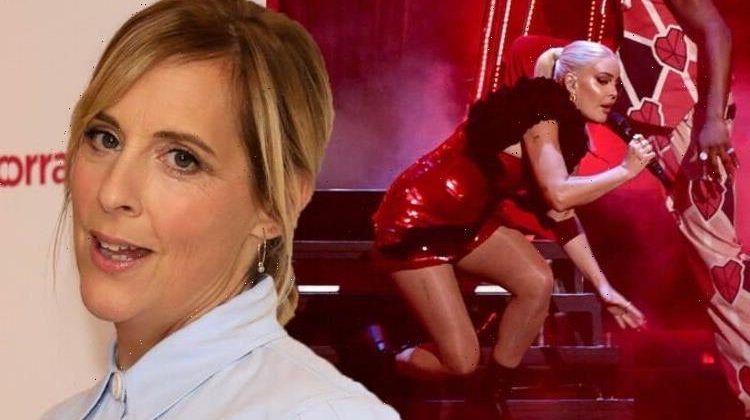 The One Show: Mel on Anne Marie's unfortunate fall

Mel Giedroyc, 53, took part in last year’s Christmas special of Strictly Come Dancing, along with winner Anne-Marie, 30. On the show the pair grew close, and are close friends, leaving Mel to leave a stern word to the Brit Awards after her fall live on stage.

No capes and no steps next year!

Mo Gilligan was hosting the evening and welcomed Anne-Marie for the second performance of the night.

However, the pop star accidentally fell down some steps live on stage.

Anne-Marie recovered from the incident and continued performing her single Kiss My (Uh Oh).

Speaking on The One Show today, Mel spoke about the unfortunate event, leaving a word of advice to the Brits.

She said: “We’re very close showbiz friends Anne-Marie and I.

“I just want to say to the Brits people no capes and no steps next year.

Mel continued: “I know! Anne-Marie was as cool as a cucumber though.”

Presenter Jermaine Jenas replied: “She did well though didn’t she, she held it well, very professional.”

Mel continued to praise Anne-Marie, saying: “It was wonderful and she made a little gag on Twitter straight away. I thought she was brilliant.”

Anne-Marie quickly took to Twitter after the incident, after she began to trend on the social media site.

She remained in good spirits as she took to the social media platform to update her 1.1 million followers following her on-stage ordeal.

The post amassed well over 50,000 likes in less than an hour, with hundreds of fans flocking to Anne-Marie’s comment section to praise the way she handled the mishap.

SelfishMinterrr penned: “The way you picked yourself back up like nothing happened was ICONIC.

“You styled it out though Anne Marie, just like the superstar you are.

“If it’s good enough for Madonna.”

Anne-Marie’s fall was compared to Madonna’s fall at the Brit Awards in 2015 when she was dragged off a platform while performing her song Living For Love.

The Pulp star snuck onto the stage, waved his bum to the crowd and then left, leaving the singer’s team outraged.