The ‘View’ co-host takes a shot at the comedianne in favor of Clay Aiken, who later tweets a well-wish for Griffin after she announces her lung cancer diagnosis.

AceShowbiz -There’s no love lost betwen Meghan McCain and Kathy Griffin and the former makes it known to the public. After Kathy revealed on Monday morning, August 2 that she has lung cancer and is set to have surgery immediately, “The View” co-host took aimed at the comedienne.

“My issue with Kathy Griffin is, I’m going to name-drop Clay Aiken as one of my closest friends in the entire world, he’s [basically] my brother. She made very, very, very cruel and homophobic jokes about him before he was out of the closet,” McCain said in the Monday episode of the talk show, referencing to Griffin’s jokes about the “American Idol” alum being gay. “We have to go back to like 2002, 2003, when that was still acceptable.”

The co-host also added that she would “love to hear an apology” from the comedian. “I don’t like her, I’m never going to like her for all the jokes she made about Clay,” McCain stressed, before talking about Griffin’s controversial picture of then-president Donald Trump‘s severed head.

Her remarks quickly earned her criticism from Twitter users. “Kathy Griffin has done more for the gay community than Clay Aiken and Meghan McCain combined. Kathy Griffin has been an ally for decades. The remarks Meghan made today were deplorable, and @abc should demand a retraction and apology. They won’t. But they should. #theview,” a person noted.

“I’m not a Kathy Griffin devotee, by any means. But I am absolutely disgusted by Meghan McCain’s behaviour this morning on @theview. The fact @abcnetwork will let her get away with this is sickening,” another user said. “Meghan McCain feels about Kathy Griffin the same way we all feel about Meghan McCain,” someone else wrote.

Aiken himself, meanwhile, had reacted to Griffin’s cancer diagnosis. In contrary to McCain’s response, he sent a well-wish for her in a tweet which read, “Love and prayers for a speedy recovery to my dear friend @kathygriffin! Selfless and gracious, she even hosted a fundraiser for my congressional campaign years ago. Get well soon Kathy. I miss your jokes!” 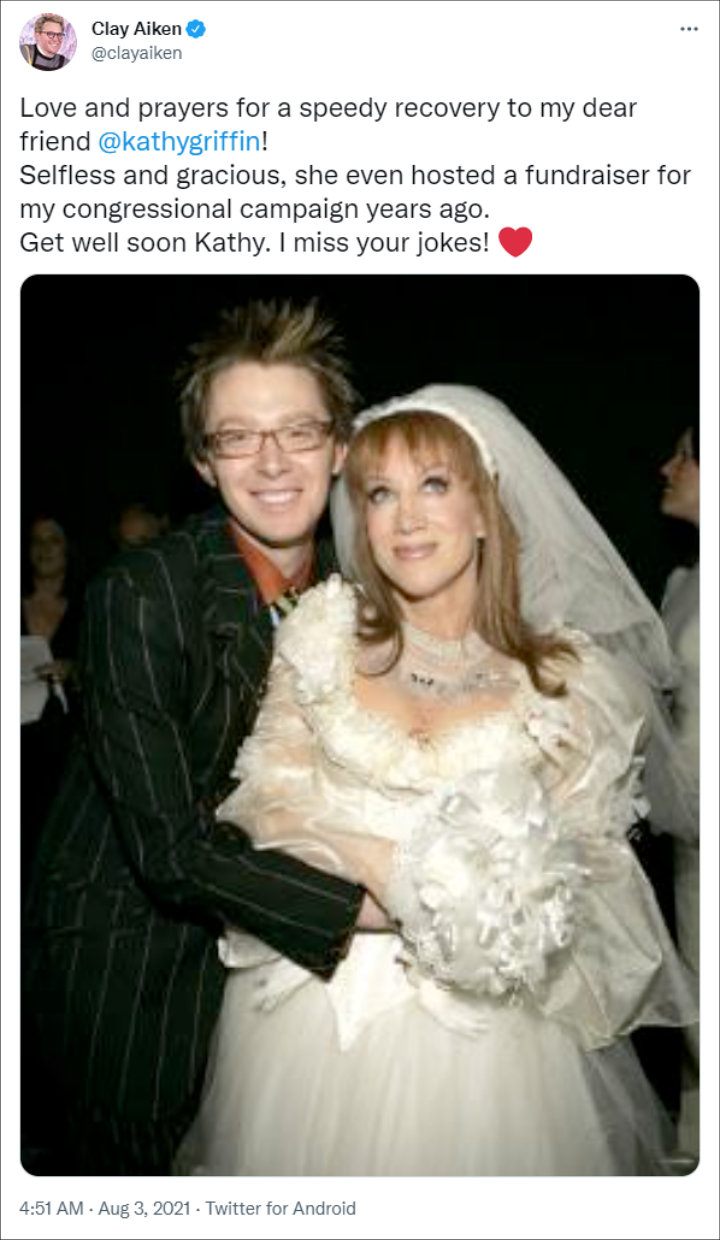 Griffin revealed she had been diagnosed with cancer early on Monday and would undergo surgery to have half of her left lung removed. “I’ve got to tell you guys something. I have cancer. Yes, I have lung cancer even though I’ve never smoked! The doctors are very optimistic as it is stage one and contained to my left lung,” she wrote on Instagram. “Hopefully no chemo or radiation after this and I should have normal function with my breathing.”

Later, a spokesperson for the “Suddenly Susan” actress shared that the procedure “went well and as planned” and “Kathy is now in recovery and resting. Doctors say the procedure was normal without any surprises.”