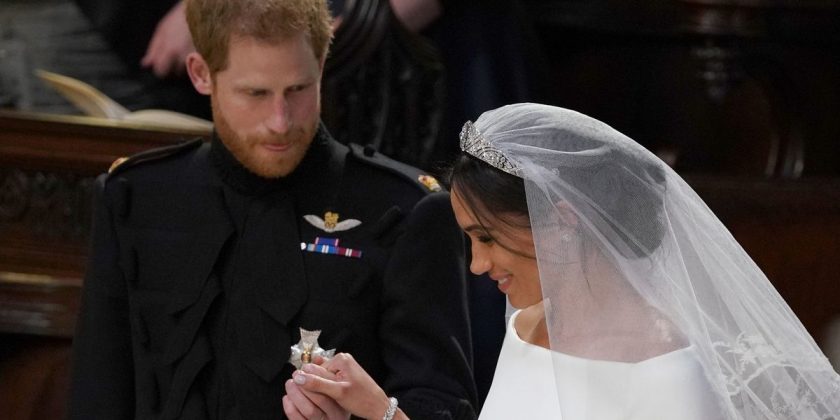 One of the mysteries surrounding Meghan Markle and Prince Harry's royal wedding has finally been cleared up – a year to the day since the huge event.

The Duke and Duchess of Sussex tied the knot on May 19 2018 in St George's Chapel at Windsor Castle, and made history by becoming the first biracial married couple in the royal family.

But one issue has continued to perplex royal fans: who was the mystery woman who handed Meghan her bouquet moments before she walked down the aisle?

And it may finally have just been solved.

On the first anniversary of their wedding day, the new parents have shared a number of never-before-seen intimate pictures from behind the scenes of their extravagant wedding.

One of them clearly show the face of the woman greeting Meghan in the vestibule of the chapel – and contrary to reports at the time, it definitely isn't the Queen's assistant private secretary, Samantha Cohen.

Samantha was credited with helping Meghan learn the ropes of royal life, teaching her the etiquette of living as a member of the monarch's family.

And it was clear the 49-year-old would have a big part to play in the royal wedding, if only to be on hand to go through the details with Meghan and Harry until they could do it with their eyes closed.

However, pictures of Samantha on the day show she's wearing a completely different outfit from the mystery flower lady.

Samantha opted for a pale pink lace midi-dress with a plunging neckline and a ruffled peplem, pairing it with an angled hat and pink block-heeled slingbacks.

But the mystery woman who hands Meghan her wedding bouquet is wearing a similarly coloured knee-length dress with three-quarter-length sleeves and a full circle skirt – nothing like Samantha's lace number.

The mystery woman also wears an angled hat featuring a large flower, but her blonde hair is worn in loose curls, unlike Samantha's straight, brunette locks.

The Duchess and Duke have released no other pictures of her, but it's clear she and Meghan share a special friendship given the smile on the woman's face as she tenderly hands the bride her flowers.

The mystery woman is also well known to Meghan and Harry's bridesmaids, because in footage from the royal wedding she can be seen bending down to greet the little girls and stretching out her hand to one of them.

As Meghan waits in the vestibule for the music to start, her friend makes her way to the aisle and hands over the small bouquet before gracefully walking backwards into place.

Initial reports suggested it was actually Kate Middleton who had been given the honour – but as she escorts her children Prince George and Princess Charlotte with the other page boys and bridesmaids, she wouldn't have had enough time to dart down the aisle to her seat before Meghan reached the altar.

However, the identity of the woman is still unknown – meaning royal fans will still be left wondering who on earth was Flower Woman.