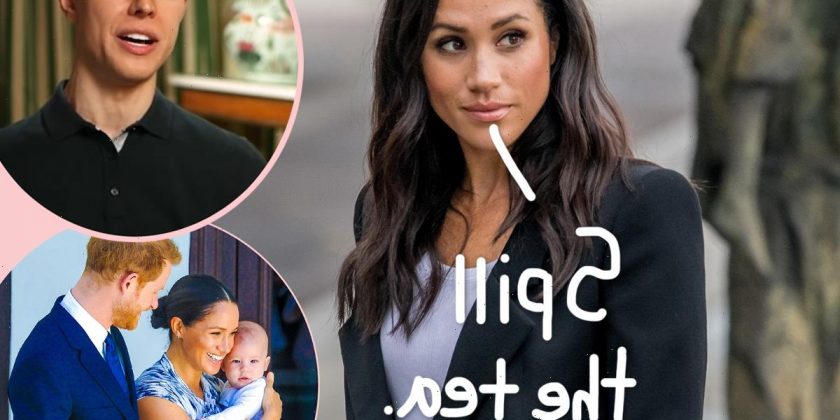 When Meghan Markle and Prince Harry sat down for their explosive interview with Oprah Winfrey, the world was absolutely shocked at what they learned — especially regarding the detail that the royal family had been racist towards an unborn Archie. We mean, even the longtime host didn’t expect it! But according to a new claim, the couple may have actually downplayed some of the details.

Meghan’s friend Omid Scobie just claimed the royals had “several” conversations over their 2-year-old’s skin color, according to DailyMail.com. Speaking at a Foreign Press Association event on Friday, the journalist claimed the Duke and Duchess of Sussex believed it hadn’t been just “one person” who openly discussed the problematic topic. However, there was one talk specifically that completely rocked the pair to the core:

“There was one conversation that took place that affected them massively when it came to someone within the royal family sharing concerns over the colour of Archie’s skin.”

What may be even worse is that some family members allegedly knew about the convos and were simply “unsympathetic” to the parent’s complaints:

“To Harry, I can see how it is one conversation, to Meghan who would have been involved in the follow-up conversations I can see — because there were other people aware of this conversation within the family and within the institution that did also speak about it, some not so sympathetically.”

“So you then are in a position where you start to feel, well, it’s not just this one person, it’s others as well and it becomes a much bigger issue.”

And when asked if he knew who made the first comment, the author replied only:

Scobie did hint, though, that he had one source but wouldn’t write about it since it can’t be verified. As we previously reported, it has been speculated that it may have been Princess Anne who had these secret meetings with Harry over his son’s skin color. However, other names were thrown into the ring, including Prince Charles, Camila Parker Bowles, Prince William, and Kate Middleton. And it sounds like it may have been any or even all of them!

Unfortunately, though, it doesn’t seem like we’ll ever know the exact characters involved in the private ordeal. You know, since Prince Harry has remained pretty tight-lipped about it.

But the reporter did vaguely spill:

“At the time, the biggest conversation was ‘did this come from a senior member of the royal family, a future head of state?’. If that individual is a head of state, then we as a public have a right to know because of course, that is someone that is our head of state, head of the Commonwealth. And if they have an issue with race, we should know.”

He has a point! But does this mean it was Charles or William since they’re both super close to taking the throne?? It certainly would surprise the public too much.

Following Meghan and Harry’s interview, you may remember how Buckingham Palace released a statement to say how they were “saddened” by the accusations and suggested that “recollections may vary.” Well, Scobie could help but also note how “cleverly” worded the message had been to “cast doubts” on the twosome’s serious allegations:

“Other individuals within the institution didn’t express the kind of understanding that should have been given. Even when William said we are not a racist family, they didn’t condemn racism in any form whatsoever.”

He then noted how The Firm never outwardly condemned racism in their statements to the public, saying:

“We do not see the Royal Family ever do that. So of course, it then continues this conversation about how anti-racism is the Royal Family, how much does the royal institution own its history, and perhaps any kind of unconscious bias that may exist within the establishment or the family. None of these things ever seem to be addressed.”

That’s for sure. And sadly it doesn’t seem like it will ever happen, at least in the foreseeable future. The family doesn’t exactly seem open to having that conversation just yet, but it’s definitely about time they did.

What are your thoughts on Omid’s inside scoop about racism within the royal family? Sound OFF in the comments (below).