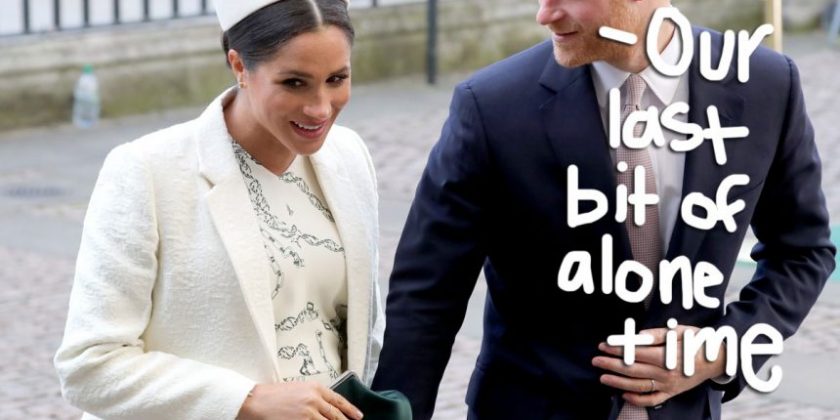 Meghan Markle is about to pop any day now!

As the world eagerly awaits the arrival of her first baby with Prince Harry, it sounds like the royals are enjoying their last bit of alone time just the two of them.

Per ET, a friend of the Duchess of Sussex revealed it’s been “a love-filled time” for the momma-to-be, adding that the former Suits star has felt “so much compassion from her new family.”

Aww! We’re sure Queen Elizabeth II and co. are just as excited for the little one as the couple is!

And while it’s been a hot minute since we’ve seen Markle step out in public, another royal source dished that “Meg looks absolutely radiant” right now and is “looking forward to the birth.”

It’s been speculated earlier this week that the 37-year-old already gave birth to hers and Harry’s bundle of joy as the couple made it clear they’d be welcoming the new addition privately. Additionally, Prince William‘s brother was scheduled to make an appearance in the Netherlands in the middle of this coming week, but he has since postponed the trip.

Royal baby watch is SO on!

The royal family played coy with Harry’s travel plans, as a spokesman for the Duke himself released the following statement to British media outlets about the itinerary changes (below):

“Due to the logistical planning for the traveling press to cover visits and engagements by The Royal Family, we have taken the decision to postpone The Duke of Sussex’s scheduled visit to Amsterdam on Wednesday 8th May 2019. The Duke is currently scheduled to travel to The Hague on Thursday 9th May for the launch of the Invictus Games The Hague 2020 as planned.”

Considering it is very rare for the royal family to cancel a pre-planned international engagement, we have to imagine it’s because Meg is due to give birth any minute now.

Of course, fans can expect to wait a bit longer to find out news of baby Sussex’s arrival as the American won’t be delivering her bundle of joy at Lindo Wing at St. Mary’s Hospital in Westminster, where Princess Diana delivered Prince William and Harry, as well as where Kate Middleton delivered Prince George, Princess Charlotte, and Prince Louis.

And you definitely won’t be seeing Meghan stepping out for a photo op right after the birth!

We only hope when she does go into labor, Harry can be present, and that she has a safe and healthy delivery!