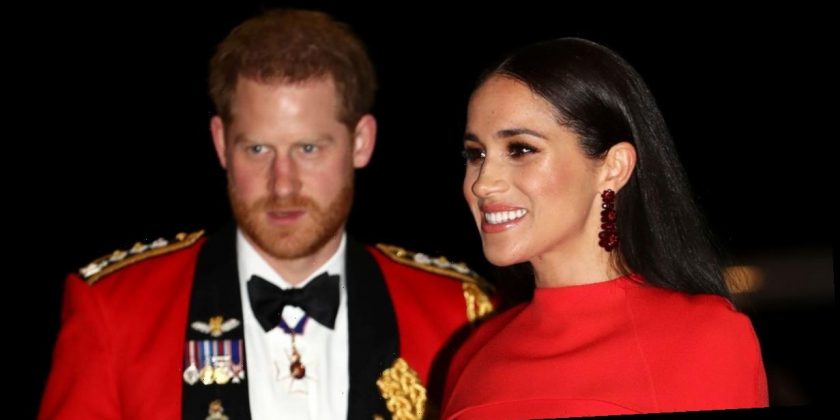 The Duchess of Sussex Meghan Markle looked stunning in a red dress as she stepped out with her husband Prince Harry at the Royal Albert Hall on Saturday night.

Meghan, 38, matched her husband Harry, 35, as she wore a full length red dress with a high neck and attached cape.

She accessorised the classy look with a pair of red pointed toe heels and a satin red clutch with a glittering embellished clasp.

The mum of one joined her husband Harry, who looked the part in his formal Royal Marine red military uniform.

Prince Harry and Meghan Markle smiled and shook hands as they greeted official at the Royal Albert Hall for the Mountbatten Festival of Music, which will mark Harry’s final engagement as the Captain General of the Royal Marines.

The festival brings together world-class musicians, composers and conductors of the Massed Bands of Her Majesty’s Royal Marines.

The visit comes as the couple complete their final string of duties before stepping down from their roles as senior royals.

Meghan was first spotted back in the UK on Thursday evening as she attended the annual Endeavour Fund Awards at Mansion House in London.

The Duchess looked radiant in blue as she joined her husband Harry at the event, which supports the recovery of wounded, injured and sick servicemen and women.

Speaking to the crowd of attendees as she Celebrating Excellence Award at the event, she said it was “nice to be back” in the UK.

Royal Family: The most extravagant parties from Prince Harry to Princess Eugenie

According to MailOnline, the Duchess said while on stage: “Its very nice to be back. Its the third year I’ve had the incredible fortune of joining my husband here. It’s just the most inspiring space.

“When we were watching the videos all the way in Canada we had the same moment of ‘how are you going to choose?’ Well, we’ve done our best.”

The Duke and Duchess of Sussex are currently completing their final duties as senior members of the royal family before formally stepped away and dropping their royal titles.

The couple made the announcement to retreat from royal life after spending Christmas in Canada at the start of the year.

Since their shock decision, Meghan jetted to Canada with their son Archie to begin their new life.

Prince Harry stayed in the UK to have a meeting with The Queen and his brother Prince Harry but, later travelled to Canada to be with his son and wife.

The Duke of Sussex was the first to return to the UK from Canada last month and was reportedly told by Queen Elizabeth, 93, he would “always be welcomed back“ into the royal fold.

A royal source told The Sun at the time: “The Queen had a lot to talk to Harry about and this was the ideal time for them to both say their piece.

"When Harry and Meghan announced they wanted to quit it all happened very quickly and it was very stressful for all concerned."

They added: "Sunday was the first time the Queen has had the chance to talk to Harry on his own and really find out what his plans are. It was a much more relaxed environment and they were both able to speak their mind."