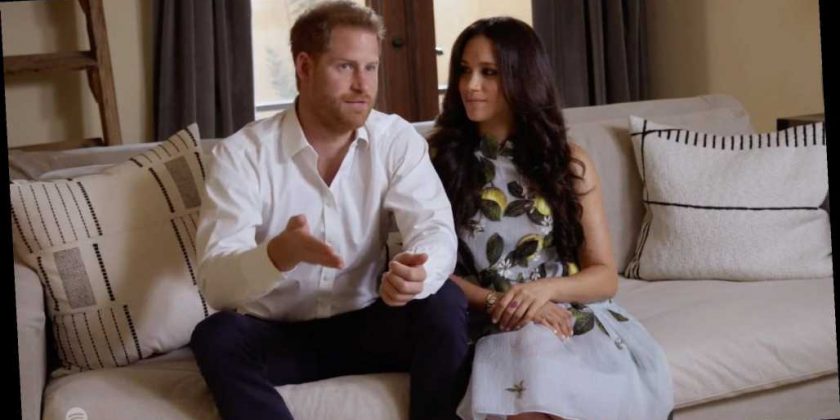 After sharing on Valentine's Day that they are expecting their second child and Buckingham Palace's confirmation last week that the couple won't return as working members of the royal family, Meghan Harry made a surprise appearance at Spotify's Stream On event on Monday.

The couple appeared on their couch in their Santa Barbara, California, home to talk about Archewell Audio, the production company they formed late last year that will create podcasts exclusively on Spotify.

Before Harry continues, "…that inspire, challenge and educate."

"We created Archewell Audio to make sure that we can elevate voices that maybe aren't being heard and hear people's stories," Meghan says.

Harry adds, "And the biggest part of this is to create this community of where you can share, that will encourage everybody else to then share their own vulnerabilities within that safe space." The Duke and Duchess of Sussex kicked off Archewell Audio by asking high-profile friends and change-makers such as Elton John, Tyler Perry, Stacey Abrams, James Corden and more to reflect on 2020 in a holiday special. They even had son Archie, 1, to take a turn at the microphone!

"You can speak into it," Prince Harry told Archie.

"Archie, is it fun?" Meghan said, to which Archie responds, "Fun?" Then Meghan repeated, "Fun!"

Archie gave a special message to listeners — with help from his parents.

"After me. Ready? Happy…" Harry said, to which Archie repeats, "Happy."

Meghan and Harry then said, "New…"

And Archie completes the message: "New Year" — and his parents cheer as Archie giggles.

In December, the couple announced a "multi-year partnership" between Spotify and their newly formed production company Archewell Audio — with a two-minute audio clip of them debuting their podcast skills.

"He has a podcast voice!" Meghan said at the end of the message after Harry gave an introduction.

Meghan encouraged her husband to kick off the clip. After Prince Harry says, "Should we start? Ladies first," Meghan told him to take the lead because she thought Archewell Audio "sounds really nice with your accent."

They introduced themselves simply as "Harry" and "Meghan."