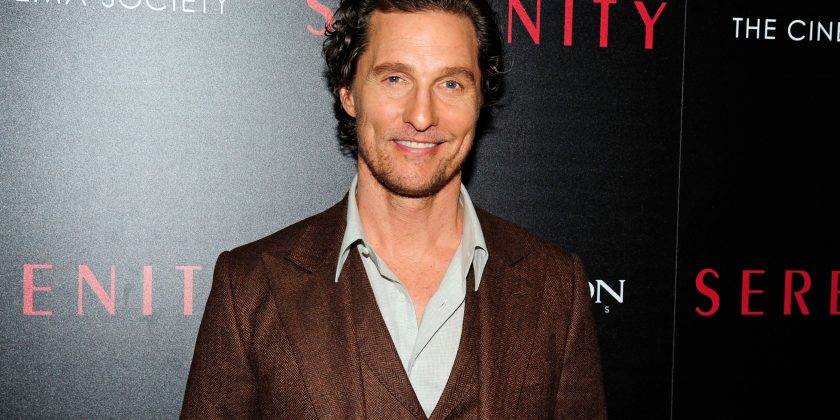 So, do big-time big-name big-earning big-league Academy Award winners ever get nervous?

Matthew McConaughey, whose film “Serenity” with Anne Hathaway recently opened: “I’m in this business 28 years. It’s exciting to get something new to do. I’ve already watched this whole film. Everybody loves it.

“But, do I still get nervous? The answer’s yes. When I see myself on-screen, yes. Look, it takes three months to make one movie that you’ll sit through for two hours. I’m very selective because I know that one minute on-screen for you to watch might be the result of 14 hours of my work. So I take it all very seriously.”

Says the “Empire” star: “Eight months of the year, I’m Cookie. A little exhausting. After 20 years in the game, a comedy. Feels good to laugh, not cry.

“First, with no script, and since my character can read minds, I just put in subjects I wanted to deal with. Like ‘MeToo’ and ‘Time’s Up.’ Great opportunity to address those in a funny way. People learn through laughter.

“ ‘Time’s Up’ is real. So real that we made a movie about it. Women need to be paid what they deserve. But we can’t do it alone. We can only create so many hashtags.”

Co-star Tracy Morgan: “The first three letters of ‘funny’ are fun. And that’s what this was. We did it like a family.

“But I’m not reading anyone’s mind. Getting into somebody else’s head can be evil, because if I don’t like what I’m reading, maybe my thinking might change your mind and I don’t want to be responsible for your destiny.”

“What Men Want” is a new take on “What Women Want,” which was made back when we still cared what Mel Gibson wants.

Meanwhile, they want everyone to go see it.

Sky’s no limit for this director

Damien Chazelle. Wrote and directed “Whiplash,” which won J.K. Simmons Best Supporting. Youngest to win Best Director for “La La Land.” Made “First Man” with Ryan Gosling and Claire Foy about our ’69 moon landing, and she says: “Our first two weeks was pure improvisation. He had us do our takes tied to dialogue. He’d say, ‘Do whatever you want.’ The man’s brilliant.”

Mobbed by paparazzi, Sundance juror Damien is already into his next project. Born in 1985, the guy’s younger than his cameras.

Comes another Trump thump. In March. Publisher, Macmillan. Author Vicky Ward’s byline has been in the Times, Vanity Fair, HuffPost and on wham-bam books. This one’s titled “Kushner, Inc.”

Instantly a presidential contender’s foot gets caught in some political bear trap, the chorus line of other zeroes limping for the Oval Office belch the identical things: “Shocked! I’m shocked!”

Between diapers and diplomacy every human being stubs a toe somewhere. If not I’d be shocked . . . SHOCKED!

Biggest winners at the un-Super Bowl? Chicken dealers. More of those parts were inhaled than at any other time — ever. So, question is: which came first — the chicken wings or the egg? . . . A family member of a lifetime ago’s lightweight boxing champ, Tony Canzoneri, wrote “Saturday’s Child: A Daughter’s Memoir.”

What this means, who knows, but a reviewer labeled it “Dirty Dancing meets Goodfellas meets Divine Secrets of the YaYa Sisterhood.”

Burped by a litigator: “Why does Lady Justice wear a blindfold? Because she can’t bear to see what’s going on.”