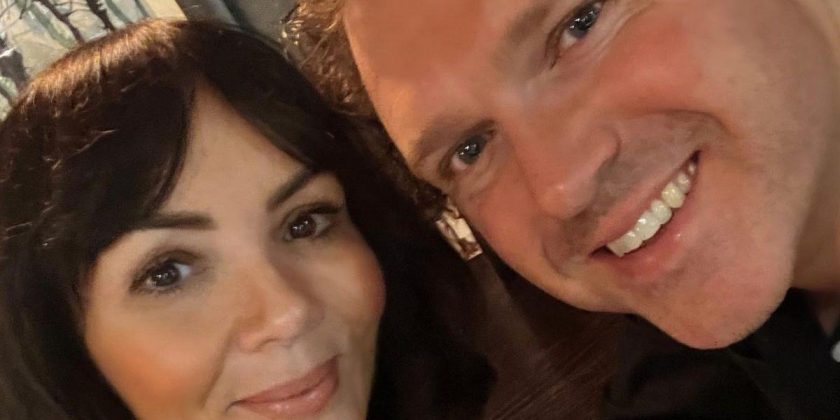 The Love Actually star, 46, took to Instagram on Tuesday to announce her brother LJ's devastating death, as she explained a cause of death has not yet been determined since LJ's passing two weeks ago.

Weeks before, Martine and her husband Jack McManus celebrated their 10th wedding anniversary with an intimate vow renewal that was attended only by their seven year old son, Rafferty.

Opening up exclusively to OK! about the day, Martine shared the heartfelt words she said to Jack in her vows, as she talked about them "weathering storms together," with the words sure to be felt even more as they've dealt with their grief over LJ's death.

She said: “It was along the lines of… We’ve been together for 15 years, we’ve worked together, played together, we’re parents together, we’re husband and wife and he has been there for me when things haven’t been shiny, glossy, beautiful and perfect – far from it.

“We have weathered storms together and have been very open about the fact that our lives haven’t always been a fairy tale.“

"The fact we’ve weathered those storms together and we’ve held each other’s hand through the less pretty times has been the making of us, actually."

"And sometimes when you think, ‘Will we get through this?’ and you do, it just makes you stronger than you ever were before. And your roots as a couple just become deeper and stronger.”

Martine announced the devastating passing of her brother on Instagram as she shared a sweet snap of the pair enjoying a garden party as they sat on a rug surrounded by balloons.

She wrote: My heart is forever broken…"

Martine continued: "My baby brother, my gentle giant, sadly passed away, suddenly, 2 weeks ago. He was 31 years old. There is no medical explanation as to why we lost him so soon and whilst we investigate further, we are having to accept that nothing will bring our boy back to us.

"L.J (Laurence John) was born when I was 15 years old and from the moment I first held him in my arms, I felt so proud and fiercely protective of him.

"He was such a character! He made us all laugh and loved nothing more than making a plan, having a great play list, bringing people together and generally having a giggle. He hated the thought of a party ending and so was always on to the next thing!"

Martine explained that her brother had a "mild form of special needs," but that he had "smashed through all expectations placed on him" and described him as her "anchor".

Devastatingly, Martine also revealed that her brother was due to get married in just a few weeks, and that he had asked her to be a bridesmaid at the wedding.

Celebrity pals such as Billie Shepherd, Tamzin Outhwaite and Sylvain Longchambon rushed to comment on the post and send heartfelt messages of condolences to Martine.