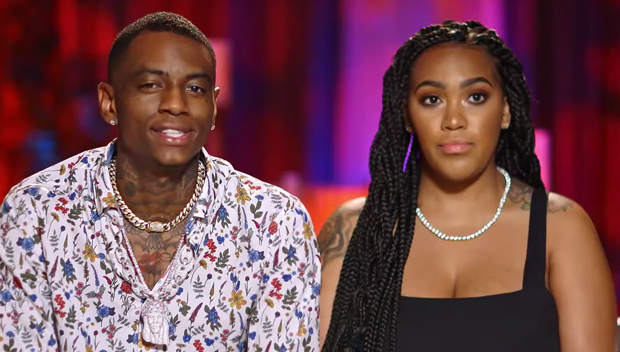 While the stars were put on blast during a surprise press conference on the Jan. 31 episode of ‘Marriage Boot Camp’, it was revealed that Nia and Lil’ Fizz used to be lovers!

The Jan. 31 episode of Marriage Boot Camp: Hip Hop Edition was almost like a swingers party because all the couples were ambushed by an unexpected wife swap. Obviously, nobody had sex with each other, but tensions rose when Nia and Lil’ Fizz — who once dated each other — were paired up together. But before we talk about the wife swap, we need to discuss the first challenge of the night, which was a press conference with the media. It was during this time that the stars were put on blast and forced to explain some of their suspicious social media posts. For example, a media representative asked Jessica Dime why she was performing “wifey duties” for Shawne Williams if he hadn’t yet married her. Especially after she had tweeted, “don’t be a long term girlfriend doing wifey duties.” Fortunately, Jessica had a quick comeback and said, “I’m not worried, nervous or any of that. Actually, I have a lot of tricks up my sleeve that I haven’t done yet for Shawne!”

Unfortunately, not everyone was able to escape the press conference unscathed. Unbeknownst to us before watching tonight’s episode, Nia and Lil’ Fizz had dated, so their past relationship was put on blast. And that made Soulja Boy feel super uncomfortable. Nia said they’re just “friends” and are “still friends”, while Soulja insisted that any rumor of a relationship between her and Lil’ Fizz is a lie. But that didn’t make things any easier — especially after Dr. Ish and Dr. V paired Nia and Lil’ Fizz up for the wife swap challenge later in the day.

Nia and Lil’ Fizz were put on baking duty and they were asked to make some brownies. Nothing was said about their prior “relationship”, but Nia and Lil’ Fizz knew exactly why the doctors put them together (to rile up Soulja Boy and cause drama). Nothing crazy happened, though, until the very end of the episode, when Nia revealed she thought she was more forgiving than she actually is. She didn’t explain what she needed to forgive Soulja Boy for, but that statement was enough for him to freak out over!

“We are where we are right now because you did so much,” Nia could be heard telling Soulja Boy from behind the door to their bedroom. Did Fizz tell her something? That’s what Soulja Boy thought because he said, “I don’t know what [Fizz] went and told you. He must have told you some cap s***. We were just good last night. And then you go out with [him] and then you come in here, ‘Oh no! I can’t forgive you.’ Stop playing with me!” Yikes!

Want more Marriage Boot Camp drama? Watch new episodes of the series every Thursday at 10pm on WE tv!