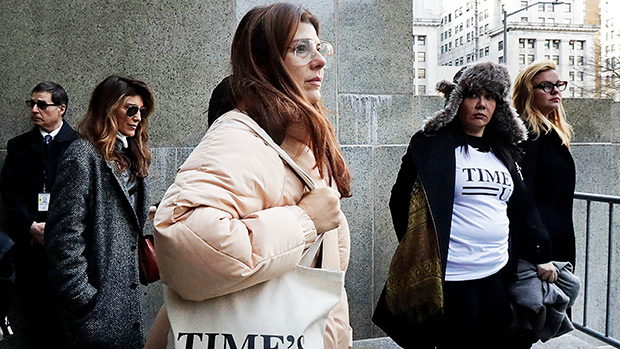 Actresses like Amber Tamblyn and Marisa Tomei wore Time’s Up shirts to watch Harvey Weinstein try (and fail) to get five rape charges dismissed. See the poignant photos of the women at the courthouse.

Time’s Up for Harvey Weinstein. The disgraced former Hollywood producer appeared in court on December 20 in New York City in a bid to get five rape charges against him dropped, and the women of the Time’s Up movement were their to see him fail. Actresses Amber Tamblyn, Marisa Tomei, Kathy Najimy, Michelle Hurd, and Jennifer Esposito sat in the courtroom, wearing Time’s Up shirts (or in Marissa’s case, a tote bag) as a Manhattan judge rejected Weinstein’s arguments and ruled that his case would be moving forward. The women, who all appeared solemn, declined to speak before heading into the courthouse, though Kathy did say, “I’m here to hear the proceeding and support survivors.”

Time’s Up, the anti-abuse organization headed by former WNBA president Lisa Borders and supported by the women (and male allies) of Hollywood, tweeted after the Weinstein verdict, “We are relieved that Harvey Weinstein failed in his efforts to avoid accountability for his crimes. We look forward to seeing justice served and seeing Harvey Weinstein prosecuted to the fullest extent of the law.” Amber tweeted a photo of the actresses, along with fellow Time’s Up protestors, all wearing their gear and posing in front of the Manhattan courthouse.

“This morning we showed up in Criminal court to witness Harvey Weinstein and his case not be dismissed. It is a small victory,” she tweeted. “But there’s a long way to go. We’ll be there again on March 7th and look forward to seeing him prosecuted to the fullest extent of the law. #TIMESUP.” Time’s Up posted Amber’s pic to their official Instagram, writing, “We show up in solidarity with survivors everywhere.
Thank you to the sisters who bore witness today in a New York courtroom. And to the women everywhere who were there with us in spirit. We are relieved that the case against Harvey Weinstein withstood this initial challenge and we look forward to seeing justice served. #TIMESUP.”

It was previously reported that Jennifer Lawrence would also attend the hearing, but that proved false. Last week, Jennifer was dragged into Weinstein’s case when a suit filed in LA claimed that Weinstein bragged about having sex with her after allegedly forcing an unknown woman, identified as “Jane Doe,” to perform oral sex on him. Jennifer denied the suit’s claims about her, saying in a statement, “My heart breaks for all the women who were victimized by Harvey Weinstein. I have never had anything but a professional relationship with him. This is yet another example of the predatory tactics and lies that he engaged in to lure countless women.”