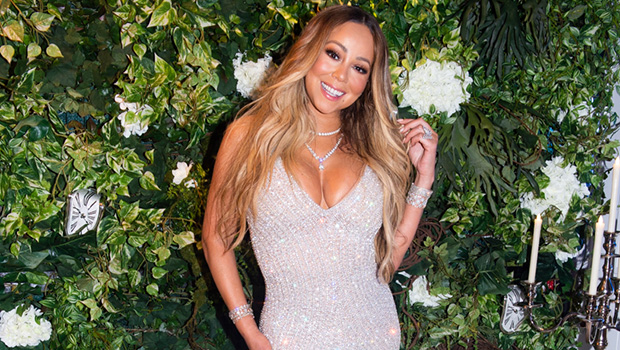 Mariah Carey proved two really is better than one when she whipped out several STUNNING New Year’s Eve Looks. See her gorgeous gowns from the night here!

As hundreds of thousands of people flooded the NYC streets this New Year’s Eve, Mariah Carey, 48, was miles away on a tropical island as the clock struck midnight! Mimi hosted the 2018 Nikki Beach Saint Barth NYE party, and dressed to the nines to do so. Throughout the night, the signer sported multiple gorgeous dresses, and wow – she looked incredible! Mimi arrived to the party is a sparking silver number, that hugged her curves, and dusted the floor. The dress was a statement all on its own, but the hit-maker added a diamond necklace to complete her ensemble, and she was shining SO bright!

A diva never disappoints, so of course Mariah kept the looks coming. For her performance at the bash, the singer slipped into a sexy see-through number that featured a black and nude color scheme. The mesh dress left little to the imagination, as Mimi belted out all her best hits. The crooner treated the crowd to a dazzling display of songs such as “Always Be My Baby,” “We Belong Together,” and “Touch My Body.”

We are having some major FOMO from Mariah’s epic island soiree! Following her performance, the singer watched the fireworks with boyfriend, Bryan Tanaka, according to a press release. We can hardly blame Mariah for wanting to escape the New York City cold weather, and skipping out on the annual ball drop. Given her on-stage flub two years ago, where she struggled to sing the lyrics to her song, we’d avoid those memories too. Plus, who wouldn’t want to kick off the new year in the beautiful Caribbean!

See both of Mariah’s sexy New Year’s Eve looks above! With a fierce fashion start like this, 2019 is about to be her best year yet!