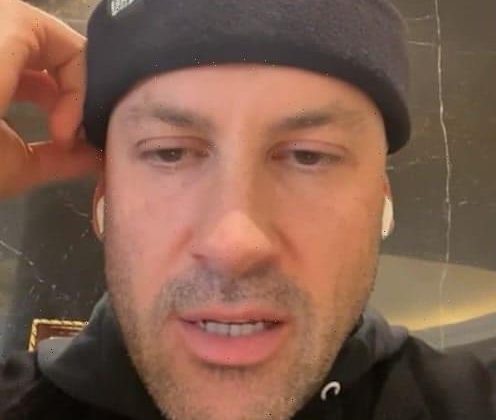 Many Ukrainian-born Americans watched with horror as the land of their birth was invaded on February 24.

Dancing With The Stars alum Maksim Chmerkovskiy was in Ukraine when the nightmare began to unfold.

While his fans were relieved when Maksim made it safely to the United States, he has been plagued with misplaced guilt.

Just days later, Maksim is admitting that he feels a desire to go back and help with his homeland’s crisis.

The 42-year-old professional dancer had a moment of raw, painful honesty with Anderson Cooper.

“I spent the last couple of days with survivor’s remorse,” Maksim admitted.

‘And,” Maksim continued, “I’m currently working on an opportunity to go back.”

“Probably sometime next week I’m going to go back to Poland,” he shared.

“And,” Maksim shared, his goal would then be to “join efforts on the ground.”

“Sort of want to justify my safe out that way,” Maksim shared.

He did not share further details, and his representative has not commented on his aspirations either.

We should keep in mind that he is not necessarily speaking of reentering the war zone, but may be referring to volunteer work to help refugees.

Maksim also spoke about his experiences in Ukraine ahead of the invasion, and in the aftermath.

“It wasn’t really a decision to leave,” he characterized.

Maksim added that “it was more like I got told that I have to go.”

“The Ukrainian people, in general, they were waiting for this conflict,” Maksim shared.

“They were prepared,” he noted, referring to how this menacing threat has been on the horizon since Vladimir Putin annexed Crimea in 2014.

“It was eight years in the making,” Maksim acknowledged, “and that was the whole general feeling since I started [working] in Ukraine in September of last year.”

“The entire time, the feeling was that something is looming,” Maksim explained.

“All the time I was being told, ‘If something happens, we’ll take you out. You’ll be the first to move out of the country,'” he recalled.

And then: “When everything happened, it happened suddenly.”

“And that morning, I was literally driving to film and at 5 a.m.,” Maksim recalled.

He shared that “someone was bombarding my phone saying, ‘You have to go now.'”

Of course, given the chaos and fear as Russia’s military launched their invasion, Maksim ended up being “stuck for the next five days.”

During his time in a besieged Ukraine, Maksim joined other celebrities documenting Russia’s invasion.

His last day in Ukraine, he shared that he was called by various military personnel whom he had met in the country.

They warned him, he shared, that he had to leave, warning that things were “about to get crazy.”

“‘You are an American citizen, you have to leave the country,'” Maksim recalled being told.

Sure enough, his status as a United States citizen did allow him to leave.

Since then, even at the moment when he boarded the train to Poland, he “still sort of fought that internal feeling” of guilt. We, at least, are glad that he is okay.