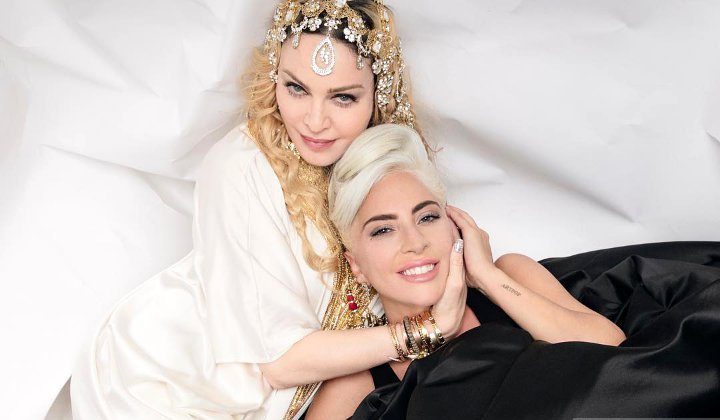 Gracing the cover of British Vogue’s latest issue, the ‘Material Girl’ hitmaker also explains why she believes she is in a league of her own and does not have living role models.

AceShowbiz –Madonna has blamed the media for hyping up her former feud with Lady GaGa, insisting they were “never enemies”.

The two pop superstars appeared to have fallen out years ago when critics suggested GaGa’s 2011 hit “Born This Way” was heavily inspired by Madonna’s 1989 release “Express Yourself” – and the “Material Girl” agreed.

They continued to trade jabs through the press over the years, with GaGa seemingly offending the 60 year old in 2016, when she branded comparisons between the pair “ridiculous” as she pointed out that she played her own instruments, while Madonna didn’t.

However, the singers finally managed to put the fall-out behind them in February, when GaGa was invited to celebrate her Oscars win for Best Original Song by attending an Academy Awards after-party hosted by Madonna and her manager Guy Oseary in Los Angeles, where they shared a warm embrace for the cameras.

Now Madonna has briefly shared her thoughts on the eight-year dispute in a new cover interview for British Vogue.

“People got very excited about (the thought of Lady GaGa and myself as) enemies, when we never were enemies,” she mused, reflecting on the way members of the press tend to pit women against one another.

During the candid chat, Madonna admitted she no longer has any artists she looks up to, because she really is in a league of her own at this point in her personal and professional career.

“There are no living role models for me. Because nobody does what I do. And that’s kind of scary,” she said. “I can look back at women who I think were great and amazing – freedom fighters, like Simone de Beauvoir or Angela Davis – but they didn’t have kids.”

“Being a single parent of six children, I continue to be creative and be an artist and be politically active, to have a voice, to do all the things that I do,” she continued. “So I mean, there isn’t anybody in my position.”