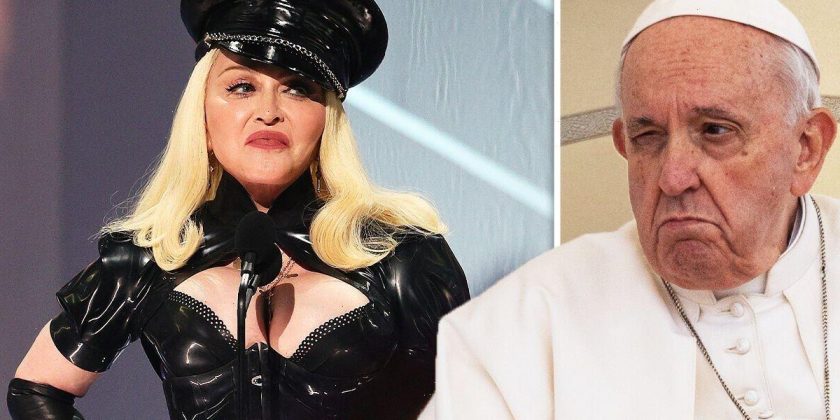 Madonna shares behind the scenes of Medellin with Maluma

Singing legend Madonna has taken to Twitter to ask for an “urgent” meeting with Pope Francis. It comes as the church has labelled the singer’s behaviour as “blasphemous” following years of raunchy music videos and on-stage performances from the icon.

Would itbe possible to meet up one day to discuss some important matters?

In view of her 2.7 million followers, the Holiday hitmaker requested an audience with the head of the church.

“It’s been a few decades since my last confession,” Madonna admitted.

She went on: “Would it  be possible to meet up one day to discuss some important matters ?

“It doesn’t seem fair. Sincerely Madonna,” she ended her post.

The Vatican haven’t always appreciated the star’s musical talents thanks to her signature, raunchy singing style and performances.

A year later, Madonna featured gyrating nuns on her Blond Ambition tour and faced backlash from the church.

Pope John Paul II called it “one of the most satanic shows in the history of humanity”, The Guardian reported.

In 2006, Madonna came under fire once again after performing a mock crucifixion on a Roman stage.

MTV reported that The Vatican had responded, accusing the Papa Don’t Preach star of blasphemy.

Despite Pope Francis not responding to the star’s tweet, Madonna soon had replies from other Catholic priests.

Fr. Matthew P. Schneider wrote: “I don’t know if the Pope himself can meet with you, but I can find you a priest near where you are to help you.

“Just DM me if you need help or have questions.”

While Padre Guillermo Serra LC penned: “Hi Madonna. I am a catholic priest.

“Do you know what ex communication means? Just checking… Praying for you!”

Madonna has also posted a number of racy snaps on Instagram of herself draped in multiple cross necklaces.

Last year, the star shared pictures from a photoshoot on her bed which saw an angel look down on her as she flashed her nipples while wearing a shiny latex costume.