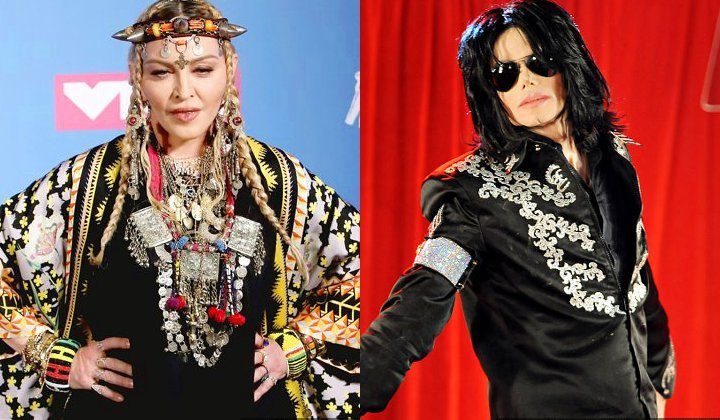 While stressing that ‘people are innocent until proven guilty’, the ‘Medellin’ singer admits she hasn’t seen ‘Leaving Neverland’ to judge whether or not James Safechuck and Wade Robson said the truth.

AceShowbiz –Madonna has broken her silence on the child sexual abuse allegations against Michael Jackson but remained coy about whether she believes them.

In the documentary “Leaving Neverland” two men, James Safechuck and Wade Robson, accused the late King of Pop of sexually abusing them as kids, detailing their allegations in graphic detail.

The Jackson family has hit back at their claims, which have provoked soul-searching among fans and stars formerly in awe of his music.

Madonna, who took Michael as her date to the Oscars in 1991, has now addressed the allegations, telling British Vogue that she is yet to make up her mind as to whether they are true.

“I don’t have a lynch-mob mentality, so in my mind, people are innocent until proven guilty,” she explained. “I’ve had a thousand accusations hurled at me that are not true. So my attitude when people tell me things about people is, ‘Can you prove it?'”.

Asked what she would take as proof James and Wade were telling the truth, the 60-year-old said she was yet to see the film, but would accept first-hand testimony – so long as she judged the accusers credible.

“I don’t know, I haven’t seen the film,” the Queen of Pop replied. “But I guess it would be people recounting actual events – but then, of course, people sometimes lie. So I always say, ‘What’s the agenda? What do people want out of this? Are there people asking for money, is there some kind of extortion thing happening?’ I would take all of those things into consideration. I guess I’ll get around to seeing it. I haven’t seen it yet.”

The detail of the two accusers’ claims has prompted many to denounce Michael, who died in 2009, but his family have hit back, pointing out that the pair both gave evidence under oath defending him against other allegations during his lifetime.

James and Wade have both filed lawsuits against the “Thriller” singer and his companies, but these were dismissed on technical grounds. They are appealing the decisions.