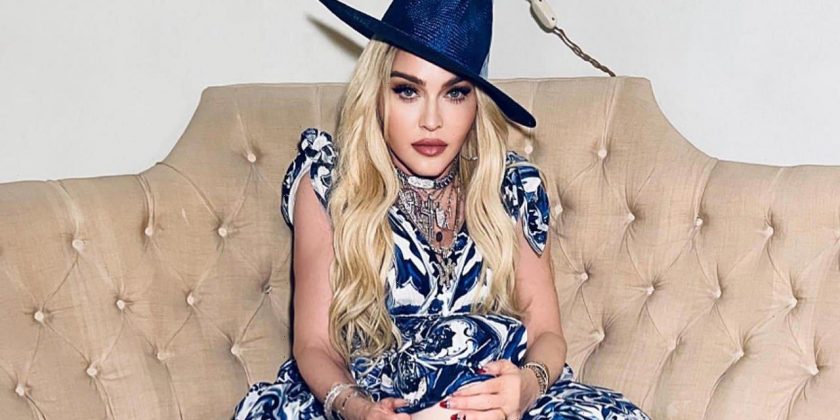 The 64-year-old Queen of Pop sends her fans into a frenzy after she seductively poses only in golden corset bottom and a pair of classic fishnet stockings.

AceShowbiz –Madonna has definitely sent fans into a frenzy. The 64-year-old “Like a Virgin” hitmaker shocked her fans after she showed off her bare breasts in topless photos shared on Instagram.

On Friday, October 28, the Queen of Pop turned to her Instagram Story to treat her 18 million followers to a series of extremely racy pictures. For both photos, she’s dressed in only a golden corset bottom and a pair of classic fishnet stockings while standing in what appeared to be her beauty and glam room, considering all the various makeup and mirrors in the background.

In the first image, Madonna could be seen leaning forward, with her breast taking front-and-center, while flashing a seductive look on her face. She covered up her nipples with a caption that read, “Went from candy to money.”

In a following Story, Madonna raised both her hands on her head as she proudly showed off her bare breasts. The “Vogue” singer then added a candy emoji and bag of money emoji to protect her modesty and not run the risk of getting banned from Instagram.

The sexy images are seemingly all part of the promotion for the 30th anniversary of her groundbreaking fifth studio album, “Erotica”, which originally dropped back on October 20, 1992. The album was released simultaneously with her first book publication “Sex”, a coffee table book containing explicit photographs featuring the singer by the Steven Meisel Studio and Fabien Baron. At the time, it garnered some backlash from critics and anti-porn groups who characterized the images as hardcore pornography.

When marking the 30th anniversary of her “Sex” book, Madonna insinuated that she paved the way for the likes of Kim Kardashian, Cardi B and Miley Cyrus to embrace their sexuality. Shortly after, however, Cardi called out Madge a “disappointment” for mentioning her.

“I literally [paid] this woman homage so many times ’cause I grew up listening to her… she can make her point without putting clown emojis and getting slick out the mouth,” Cardi fumed on Twitter. The “Bodak Yellow” femcee added, “These icons really become disappointments once [you] make it in the industry. That’s why I keep to myself.”

A few hours later, Cardi herself revealed that she and Madonna had ended the beef. “I talked to Madonna …It was beautiful….Have a great day and drive safely yallll,” the 30-year-old raptress declared on Twitter. She also quote-retweeted the singer’s tweet that read, “I love you @iamcardib !! Always have and always will.” In her message, she wrote back, “Love you [one red heart emoji].”

Confirming that they’re no longer feuding, Madonna posted a video via Instagram Story that saw her dancing and lip syncing along to Cardi’s GloRilla collab “Tomorrow 2”. Over the clip, Madge sweetly wrote, “[red heart emoji] u @iamcardib.”