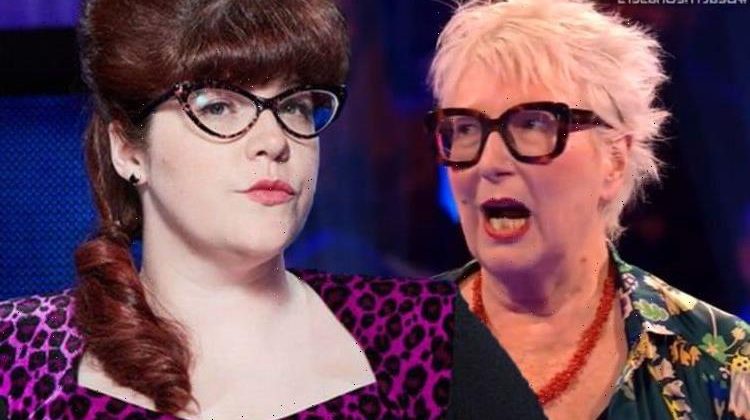 The Chase star Jenny Ryan has taken to social media to share her confusion with fans following the latest episode of ITV’s hit quiz show Beat The Chasers. Last night saw Ryan face off against comedian Jenny Eclair, which meant the chaser was often left wondering which Jenny presenter Bradley Walsh was referring to.

Ryan, 39, wrote in view of her 103,000 Twitter followers: “Campaign to not have me face off against any more contestants named Jenny…

“That game made my head spin! I wanted to answer every time I heard my name,” she added with a laughing emoji.

The quizzer also attached a video showing the comedian’s entrance to the programme, where she appeared to be revelling in the studio applause.

As Eclair, 61, walked confidently on to the stage, chaser Mark Labbett earned a giggle from Ryan, as he called her, “easy meat”.

As the applause died down, Eclair exclaimed: “Oh that was so thrilling! It’s been such a long time. Oh don’t stop now!”

At this, the applause started up again, and she continued: “I can go home happy now. Thank you very much everybody.

“I’m so sorry. I will disappoint you, but let’s keep our fingers crossed.”

A number of fans took to the comments section to admit that they could see Ryan’s point, as they too found themselves mixing up the two Jennys.

“Must have been very confusing,” commented Justkeepchimmin, with a laughing emoji.

“I must admit it messed with my head too lol x,” added solar_universe with another laughing emoji.

Carly Gillam wrote: “Oh I’m glad you mentioned this because I did wonder if it got confusing for you hearing Jenny a lot because it did me watching it.

“You absolutely smashed it though Jenny with the little head to head with the other Jenny. Proud #teamvixen.” (sic)

During Eclair’s turn on the show, Ryan was left giggling at one particularly suggestive answer to one of her questions.

During the celebrity special, host Bradley asked Eclair: “Which of these has not been an Olympic Games event? Is it A, tug-of-war, B, sack race, C, motor boating.”

As he read out the third answer, the studio audience erupted into laughter, given its sexual innuendo.

The camera panned to Ryan, who could be seen trying to suppress her laughter, while Eclair told Bradley: “Motor boating sounds like something filthy but it isn’t. I’m going to go for B, sack race.”

Ryan, who goes by the name of ‘The Vixen’ on The Chase, wrote questions for the show’s pilot episode back in 2009.

It was not until 2015 that she made her debut appearance, however, after she was recommended by fellow chaser Anne Hegerty.

Aside from the popular quiz show, Ryan also competed in 2019’s The X Factor: Celebrity, in which she placed third.

A new episode of Beat The Chasers – Celebrity Special will air tonight at 9pm on ITV.