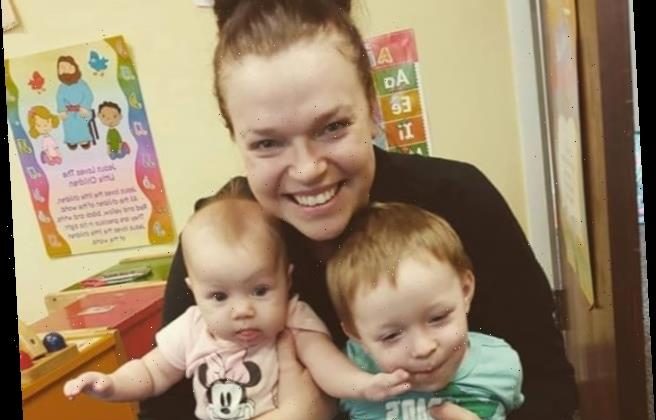 Maddie Brown has shared an update about her daughter.

Her brave, heroic, truly inspiring daughter, we ought to say.

That would be a far more accurate description.

As most Sister Wives fans know by now, the 24-year old daughter of Janelle and Kody Brown posted a photo earlier this week of her one-year old child, Evie, in the hospital.

The toddler had just had her foot amputated.

This surgery was needed because Evie was born with a VERY rare medical condition called fibular aplasia, tibial campomelia and oligosyndactyly (FATCO) syndrome.

As a result, she does not have all of her fingers and toes and her limbs have severe deforrmations.

In the above photo, Maddie is holding her precious daughter after Evie underwent a Boyd amputation, which is an amputation at the ankle that helps with stabilization.

“Her surgeon laid the groundwork for her new foot and mobility it will bring,” Maddie explained on Instagram. Another [operation] gave her some extra mobility in her hand, by clipping her webbing she had in her right hand.”

She added that the little girl “is home and is recovering beautifully.”

And now we have the evidence to prove it!

“Smiles and good moods are coming back!” wrote Maddie as a caption to a new video of Evie laughing on her mom’s lap.

What an awe-inducing one-year old.

Just look at this ray of sunshine, you guys!

Maddie and husband Caleb, who are also parents to a three-year old son named Caleb, welcomed Evie last summer and opened up about her diagnosis in October.

She recalled when she first learned the news in an interview at the time with People Magazine:

“We were shocked,” she said.

“I was just sitting there trying to comprehend what’s going on, having just had a baby as they are bringing in all these specialists. I was freaking out.”

FATCO is so rare that it only affects about five in one million babies.

Therefore, not a lot is known about what the future holds for kids who are diagnosed with this condition.

“There were lots of emotions.

“But I was also relieved because there could have been a whole lot more wrong,” Maddie told People late last year, showing some incredible perspective.

Evie’s birth was filmed and featured as part of the season finale of Sister Wives this spring, with Janelle and Kody present for the delivery.

Neither of the grandparents has said very much about their granddaughter in the year since she was born, but it’s harrd too blame them. This is such a personal and painful challenge.

But it’s one both Evie and Maddie seem up for.

We cannot applaud them enough.

Kody Brown and Meri Brown: All the Signs It’s SO Over!Start Gallery