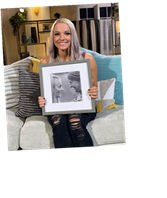 Mackenzie McKee claims she has quite the story to tell.

She just really hopes you wanna read it.

The long-time Teen Mom OG cast member has announced on Instagram that she’s written a memoir, one that already has a cover… an Amazon summary … and a release date.

“I’m so excited to officially announce my new book!” wrote McKee as a caption to the following image.

‘I can’t wait to share my life story with everyone, there are so many details and stories that you never got to see on the show.

“You can pre-order a hardcover copy using the link in my bio, It comes out this Fall.

“Thanks for all your support!”

To be specific, the book is scheduled to be released on October 12.

As for the topics Mackenzie will cover? It’s not hard to guess, right?

This is a reality star who has been through it all since about 2018.

First, tragically, her mother was diagnosed with cancer, spending multiple years battling against the disease in very public and very brave fashion.

In December 2019, however, Angie Douthit passed away.

McKee is still struggling with this loss, while also dealing with a cheating husband and a marriage she continues to try and repair.

At this moment, at least, Mackenzie is back together with the father of her three kids — and clapping back hard against any critic who has a problem with her decision.

According to to the book’s Amazon page, this will be a “raw, courageous account of a young woman determined to turn her turmoil into triumph.”

The page-turner will apparently cover Mackenzie’s time on 16 and Pregnant and Teen Mom 3, as well as Teen Mom OG, delving into such personal topics as her challenging childbirths, her Type 1 diabetes and the death of her mother.

Taking again from the Amazon description:

Through it all, Mackenzie never falters in her deep love of family and God.

In her new memoir, Mackenzie proves there is more to her than what the glaring spotlight of fame has shown.

This same description then teased some sort of bombshell reveal McKee is preparing to drop on readers:

She confronts a never-before-shared secret that upends her young life, and explores her struggle to gain acceptance in a family where she felt she was the only one who was less-than-perfect.

Follow along as Mackenzie learns to stand tall, conquer her mistakes and fears, and ‘straighten her crown’ in an effort to help others straighten theirs.

Yes, the memoir will be titled “Straightening My Crown: Conquering My Royal Mistakes.”

Considering the revelations recently shared by Meghan Markle and Prince Harry, Mackenzie may wanna shy away from any connection to the Royal Family.

But we feel pretty confident in it, Mac.

Either way, the explosive memoir will be released by Post Hill Press, the publishing company that has published all of the Teen Mom cast books over the years.

With Mackenzie now being added to the this authors list, we’re left only Chelsea Houska, Cheyenne Floyd and Briana DeJesus as the franchise stars who have NOT published anything about their lives.

We’re guessing that soon changes, though.

It’s easy to image Houska coming out with a memoir soon, isn’t it?