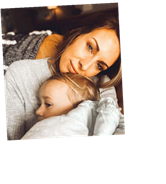 Have no fears, Ryan Edwards.

At least one person out there has your back.

Earlier this week, Mackenzie shared a very sweet photograph of herself and her so, Jagger.

“There’s no place like home,” the 23-year old captioned her post, prompting at least one social media user to speculate why husband Ryan Edwards was a no-show.

“Why doesn’t Ryan post? Why no pics of him?” this person questioned about the piece of content.

Sort of an odd inquiry, right? As if both parents must be present for all photo opportunities with their kids, you know?

We aren’t the only ones think this, either.

The above remark led to a debate with some fans arguing that it’s not “strange” for people to post photos without their significant others.

“No. He’s had a lot of problems,” the social media user added, explaining that he/she was asking about Ryan due to his very well-known drug and legal issues overr the years.

These issues have been well-chronicled on Teen Mom OG, as Ryan is the father of Maci Bookout’s oldest son and the two have often clashed over how infrequently Ryan is allowed to see the child.

Mackenzie, meanwhile, actually took notice of the previously-detailed back-and-forth exchange going on … and let the troll know she won’t be tolerating any rude remarks on her page.

“Don’t we all have problems? Or are you one of the rare few that don’t have any,” she clapped back.

A few weeks ago, the MTV star shut down yet another naysayer after he/she accused Mackenzie of being “trashy” for ordering fast food at Chick-fil-A.

“15 minutes of fame for the gullible, narcissistic enabler,” the person wrote. “Not everyone is a trashy fast fooder.”

(Editor’s Note: We’re no huge fan of Ryan, or Mackenzie really, but what the heck people?!?!)

Mackenzie shot back at this loser as follows:

“OK, Kathy, thank you for pointing out that I’m a ‘trashy fast fooder.’ I like all the fooders. My belly is full, and my heart is blessed.

“Whatchu [sic] gonna do about it?

“But you better be careful talking about God’s chosen chicken like that.”

Ryan, for his part, has mostly stayed out of the spotlight since his arrest in eary 2019.

Mackenzie also recently shared a photo of Ryan on her Instagram Stories, confirming the two they are still going strong.

“So, we went to a wedding this evening and I love weddings, I love getting dressed up, I love being able to do my makeup because first of all, I don’t want to do that every day, all day,” she wrote as a caption on October 24.

“No. It takes too long. And then at midnight, boom, back to my pumpkin self I go.”