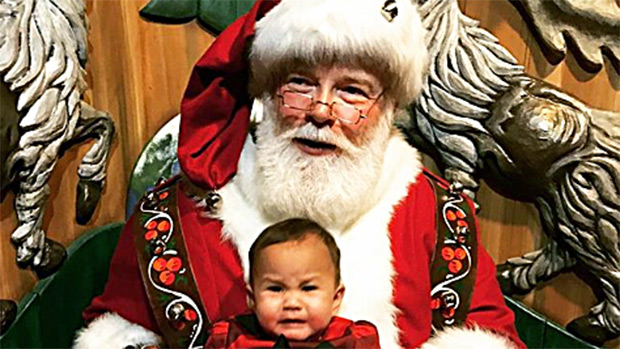 Can you blame them? These little ones were not a big fan of Santa’s lap, and we’ve got the pics to prove it. Take a look — and have a laugh!

Just because little kids love when Santa brings them gifts every year definitely does not mean that they love posing for pictures on his lap! In fact, many babies — famous ones, included — are terrified by the man in the big red suit. Whether they’re screaming, reaching for their parents or just pushing out their lower lip, the photos of these scared little ones are so hilarious. And yes, it’s okay to laugh! Even Kelly Clarkson, 36, admitted that she got a kick out of her daughter River, 4, freaking out on Santa’s lap. Why else would celeb parents post pics like these if they weren’t trying to make their followers smile?

Take Chrissy Teigen, 33, for instance. Back when her daughter Luna Legend, 2, was an only child, Chrissy and John took her to see Santa in a black and red plaid dress with Mary Jane shoes and ruffly white socks. So cute! But as perfect as her outfit was, as well as the initial picture Chrissy showed her fans, the honest momma admitted that there were some bumps along the way. “We only share what we want you to see, my loves,” she captioned another photo of Luna from the same day. But that time, her face was twisted up in fear as she cried. Aw!

The most iconic pictures of celebrity kids crying with Santa, though, definitely happens when one sibling is having a meltdown while the other is happy as can be. Not only did JWoww and Snooki‘s kids do this, but Kim Kardashian and Kanye West‘s children North, 5, and Saint West, 3, fell into the same category as well. ‘

So take a look at the gallery above if you’re in need of a god laugh — or just a little assurance that your kid isn’t the only one who doesn’t want to sit on Santa’s lap.