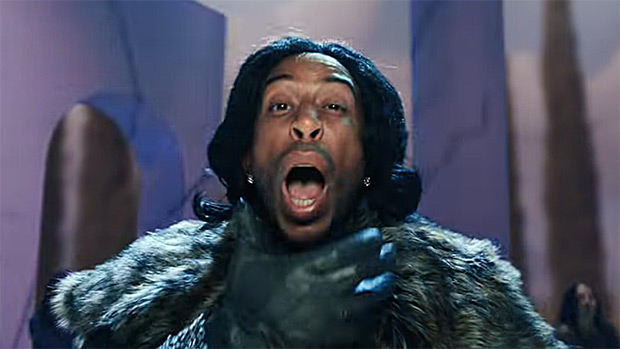 If you could change the world with a single word, what would you do? Mercedes-Benz poses this question in its Super Bowl ad that features Lassie, Wile E. Coyote, and an opera-singing Ludacris!

“Make the putt,” says the unnamed man at the start of Mercedez-Benz’s 2019 Super Bowl commercial. As if on command, the golfer, PGA champion Rickie Fowler, makes the putt. The guy continues to test out this power by turning a traffic light and tearing up a parking ticket. From there, it’s a wild party as he “makes it rain” (thus, makes an ATM explodes), calls for help when an elevator gets stuck (cue Lassie) and transforms an opera singer into Ludacris after ordering someone to “change the music.”

The commercial goes bananas, with cameos from Wile E. Coyote, Free Willy, and more. It’s all about the Mercedes A-Class, an all-new model that targets younger buyers, according to AdAge. The Mercedes-Benz User Experience (MBUX) is “capable of responding to complex questions, while taking actions like switching on the reading lamp if the driver simply extends a hand toward the rear-view mirror.”

“Some car commercials in the past you have a new model year or maybe a new headlight design, something like that where you need to make something out of it,” says Chris Landi, EVP Group Creative Director for Merkley & Partners, the agency behind the ad. “This was one of those times where we had a real good piece of news.”

The A-Class model, which starts at $32,500, aims to revolutionize how the new generation views the driving experience with this new interface. “Put simply, we are changing the way drivers interact with their cars, and we’re starting with our all-new entry-level model. MBUX is a game-changer and we think that once aware of the A-Class price point and technology, a lot of people who hadn’t considered Mercedes or thought owning one was still several years away will want to take a look,” Drew Slaven, VP of marketing for MBUSA, said in a statement, per AdWeek.

The choice to have Luda in this ad seems random, but considering where the Super Bowl is happening this year, it makes sense. Super Bowl 53 will take place in the Mercedes-Benz Stadium in Atlanta, the same town where Luda first broke out as a rapper during the early 2000’s wave of “Dirty South” hip-hop. Southern hip-hop is all over the Super Bowl this year. Outkast’s Big Boi will perform in the halftime show, while the king of crunk, Lil Jon, is featured in Pepsi’s Super Bowl ad. Georgia native 2 Chainz, 41, is also in a Super Bowl ad, as he and Adam Scott dropped a full-fledged rap video to promote Expensify.