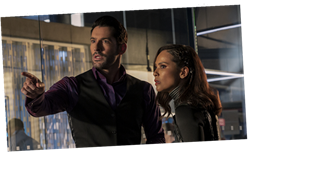 Lucifer may exist in a heightened reality where demons and celestial beings roam free, but the fantasy drama will be exploring a very real, topical issue — social justice and Black Lives Matter — in the upcoming sixth season.

“When we got back to the [writers] room, we started looking at the fact that we’re a cop show and in what ways have we contributed or not addressed the systemic issues of the police department. And we decided we wanted to speak to it. So we’re actually doing a story that speaks directly to it, and we’re super excited about it,” Modrovich said, referencing the criticisms TV police dramas and comedies were forced to face head on earlier this year.

“I feel nervous about it because I want to get it right,” Modrovich admitted, adding that she will be writing that particular season 6 episode. (The writers are halfway through planning out the sixth and final season.)

Henderson added that it was crucial for the writers that Lucifer address the current climate of the country in regard to racial injustice. “What we did want to do was speak to the cultural reckoning we’re all going through and, I think, we’ll be continuing to go through, and our place in it and our responsibility to say something,” he explained.

‘Lucifer’ Season 5A: Aimee Garcia and D.B.Woodside on That Michael Twist, Romances and Ella’s Assault

‘Lucifer’ Season 5A: Aimee Garcia and D.B.Woodside on That Michael Twist, Romances and Ella’s Assault

“And go at it through our characters’ eyes from an emotional place and not a preachy place,” Modrovich promised. “To really look at the situation socially, emotionally and have it resonate on a deeper level than just words or rhetoric.”

Modrovich and Henderson spoke about the discussions they’ve been having in the writers room and with cast members about the movement to ensure the episode is written and executed with care and respect.

“We have a lot of voices in the room. We’re a pretty diverse room, so it’s taken a lot longer than most episodes to break because we have talked about everything. There have been many tears shed,” Modrovich said. “I can just say everybody’s very passionate about it, so I think that’s what we’re doing to get it right. We’ll probably fine-tune it forever and be working on it until we shoot it.”

“We spoke to [the cast] about it and engaged them in that conversation as well,” Henderson added. “You might have noticed that our cast has been tweeting about it quite a bit. It’s very important to all of them too. D.B. [Woodside] was one of the people in particular that we really engaged with it — Lesley-Ann [Brandt], with Tom [Ellis]. Normally we pitch them their stories and a little bit of mythology, but this is a thing that almost all of them asked about, so we’ve listened to them and we’ve tried to make it as much of a conversation as possible and a listening exercise.”

Earlier in July, Woodside was candid about the Black Lives Matter movement and the importance of fighting for equality in the current climate.

“The movement is extremely important, and we all have to push this change that we really wanna see,” Woodside told ET. “Listen, I think [for] anybody that’s Black, this has been a really challenging time. I think what we’re learning is, is that there’s a whole lot that white people didn’t really understand, didn’t know. And perhaps some of that was because they didn’t take the initiative to really know, to really find out.”

“So what I’m saying now to people is, if you see injustice anywhere, you have a responsibility to right that injustice. You have a moral obligation,” he continued. “Those of us who are privileged enough to do what we do, I think we, especially, have a bit more responsibility to reach out and to use our platforms for good.”

While other scripted shows like Grey’s Anatomy and This Is Us are opting to incorporate the pandemic into their storylines, count Lucifer out.

“As far as the pandemic goes, nope. No one wants to talk about COVID on Lucifer,” Modrovich confirmed. Henderson added that the pandemic isn’t something he believes is necessary to weave into the fabric of the series, which lives in its own established world of fantasy. “We figure by the time we’ve aired, we’ll look back at that and be like, ‘That sucked and I never want to go back there again.'”

To stay up to date on breaking TV news, sign up for ET’s daily newsletter.